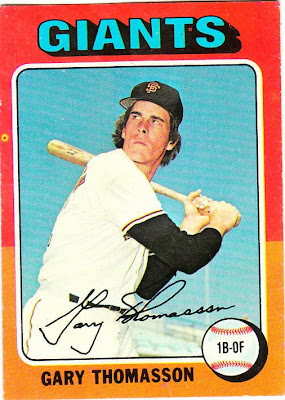 Card fact: This border color combination looks pretty good with the Giants, but this is the first time that it has been used with a Giants player.

What I think about this card now: Gary Thomasson's bat looks like it came from Kay-Bee toys.

Other stuff: Thomasson came up with the Giants and was a fourth outfielder for San Francisco during the days when the team featured a starting outfield of Bobby Bonds, Garry Maddox and Gary Matthews. Thomasson also played some first base, as you see by the position designation on the card.

Thomasson was shipped to Oakland in the massive trade that brought Vida Blue to the Giants. But Thomasson was traded again to the Yankees three months later. He played in the postseason in 1978 (going 1-for-5) and then was traded to the Dodgers, where he was a backup outfielder for two seasons.

Afterward, Thomasson signed to play in Japan, inking the highest-paying contract in Nippon Pro Baseball at the time. He led the league in strikeouts, receiving the nickname "The Human Giant Fan" by Japanese writers. His playing career ended with a knee injury his final year in Japan in '82. 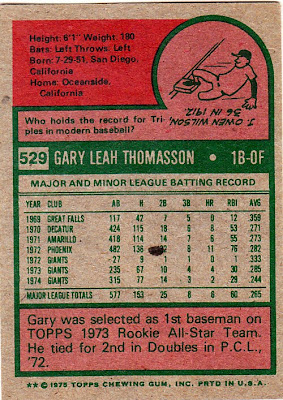 Back facts: The cartoon features another fact that will probably be correct forever. Ain't nobody catching that record.

Other blog stuff: On this date in 1975, Bob Watson scores what is believed to be the millionth run in major league baseball history. That is later proven incorrect, but unfortunately the million Tootsie Rolls that Watson won for his feat were probably all gone by then.
Posted by night owl at 1:37 AM

I wonder if his parents were expecting a girl.

I was curious where John Owen "Chief" Wilson ranked on the All-Time list for Triples (I'm randomly capitalizing words just like Topps). His 114 career triples ranks 110th on the list. Sam Crawford leads with 309. I think that's another record that's pretty safe.