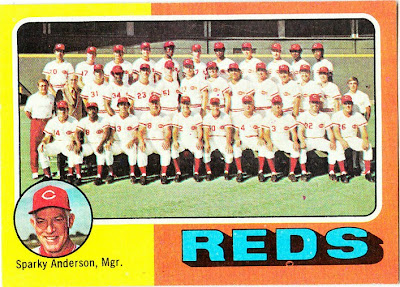 Card fact: This is the sixth orange-yellow bordered team card. That ties it with the tan-light blue border combination as the color combo on the most team cards.

What I thought about this card then: Team card, shmeem card.

What I think about this card now: This is the one card in the entire set that I had the most trouble obtaining in respectable shape. For a long time, my complete collection featured a Reds team card with fully rounded corners because it was all I could find. Repeated trips to card shows and shops failed to yield anything any better. Fortunately, I now have one that is up to my not-so-exacting standards.

Other stuff: In 1974, Sparky Anderson and the Big Red Machine suffered through the one black mark in their five-year reign in the National League West. The Reds won the N.L. West in 1972, 73, 75 and 76, but finished second to the upstart Dodgers in '74. 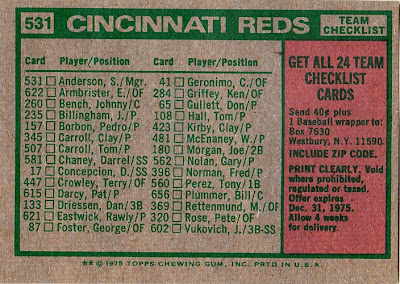 Back facts: John Vukovich, listed last on the checklist, is the only player on that list who did not play for the Reds in 1974. He played for the Brewers and is airbrushed into a Reds cap on his card.

Other blog stuff: The Reds were a well-known team in 1974, so I doubt Topps left anyone notable off the team, but let's take a look.

Cincinnati used 35 players in 1974. Topps featured cards of 27 of them, plus one of airbrushed Vukovich, in the 1975 set. It also produced a card of Reds pitcher Roger Nelson, who is airbrushed into a Cardinals cap on his '75 card. So, 27 out of 35 is a 77.14 percentage, which is one of the higher ones yet.

All of the top players are present and accounted for. Utility player Andy Kosco (37 at-bats) and relief pitcher Dick Baney (22 games) had the most appearances among players without cards. Both were at the end of their careers (although Baney was only 27 at the time).

So, here is where the Reds rank with the other teams featured so far:


Only four more chances for the Padres to get out of the basement.
Posted by night owl at 12:46 AM

Oh for the days when the Reds were really, really good.

I think the Padres are stuck there and the Twins will reign supreme!