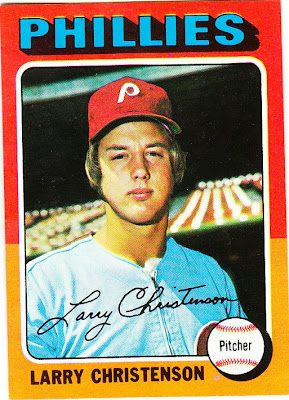 Card fact: I'm fairly certain that the photo for this card came from the same photo shoot as the photo on Larry Christenson's 1974 Topps card.

What I thought about this card then: I valued Phillies cards almost as much as Rangers cards back then. But Christenson kind of unnerved me with his squinty-eyed stare.

What I think about this card now: There is almost a hypnotic effect going on with the glare of the stadium seats over Christenson's left shoulder.

Christenson suffered from injury issues during the second half of his career. He had an injury-plagued 1980, when the Phillies went to the World Series. He did manage to start Game 4 of the World Series, but was battered by the Royals in the first inning (I remember it vividly because I was rooting for the Royals -- one of the few times I rooted against the Phillies in a non-Dodger game).

Christenson's career lasted through 1983, and he played entirely for the Phillies. He worked in investing after his career and is now president of Christenson Investment Partners. He does many appearances with the Phillies and spends time with charitable causes. 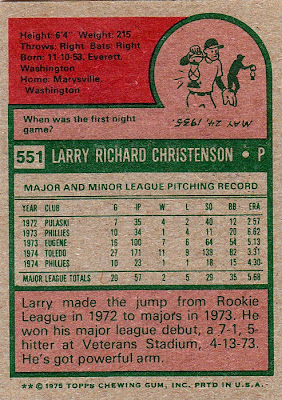 Back facts: Hey! A night game cartoon! Not very realistic though. There would be a few incidents if you had to field with lanterns.

Other blog stuff: I'm a bit late with this one, but a heartfelt RIP to Paul Splittorff who died earlier this week: 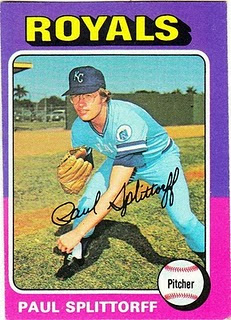 Wherever my childhood friend Jeff is these days, I'm sure he has a heavy heart. He was a favorite.
Posted by night owl at 1:53 AM

He could give lessons on how to sign autographs to modern players. Nice cartoon. It would look great in your header.