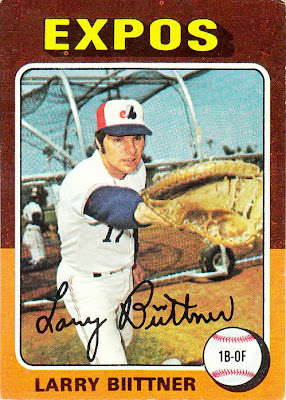 Card fact: Larry Biittner returns to a Topps set after being left out of the 1974 set.

What I thought about this card then: Didn't know about it.

What I think about this card now: My, what a big glove you have Mr. Biittner.

Other stuff: This is the second straight card of a player who competed for both the Senators and the Rangers. Pete Broberg and Larry Biittner were teammates on that first Texas Rangers team.

Biittner was a good contact hitter, but didn't have much power for someone who played first base. His best season came with the Cubs in 1977 when he played in a career-high 138 games, hit 28 doubles and batted .298. Overall, he played for the Senators, Rangers, Expos, Cubs and Reds.

Biittner's role in the second half of his career was as a pinch-hitter and he became quite successful, finishing 12th all-time in total pinch hits at the end of his career with 95. Biittner was also the first free agent signed by the Reds. Cincinnati famously avoided signing free agents during the late '70s before finally jumping in with the Biittner signing in 1981. 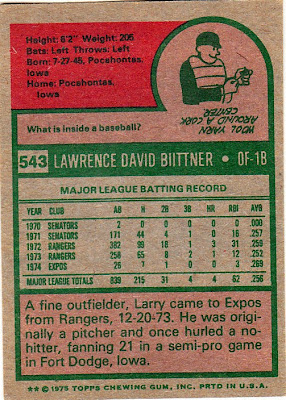 Back facts: The information about Biittner being a pitcher is notable because he was once called upon to pitch while with the Cubs in 1977. Chicago trailed Montreal 13-3 when Biittner took the mound. He allowed six more runs, but struck out three batters.

Other blog stuff: On this date in 1956, the Pirates' Dale Long hits a home run in the ninth inning against the Cubs. He will hit home runs in each of the next seven games to set a record. It is later equaled by Don Mattingly in 1987.
Posted by night owl at 1:01 AM

I always do a double take with the "II" in his last name. Is that Barry Foote catching behind him? I thought it might be Gary Carter, but Foote wore 9 part of that season and it looks like a single digit number to me.