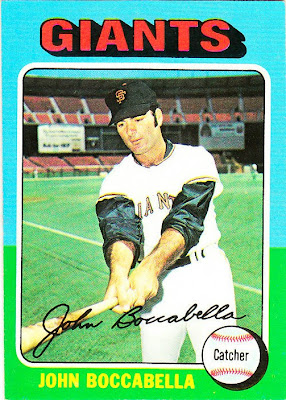 Card fact: This is the final card issued of John Boccabella during his career. He didn't play in the majors past 1974.

What I thought about this card then: I didn't see it. My knowledge of Boccabella, and his terrific name, came from the 1969 Topps card, which I obtained with a bunch of other '69s from the older brother of a friend.

When I was completing the '75 set years later, I came across the '75 Boccabella card and couldn't believe he was still playing. The distance between 1969 and 1975 seems like decades to me, because of the age I was in the '70s, even though it's only six years' time.

What I think about this card now: The angle of this photo makes it seem as if Boccabella is floating over the field, like Bjork in the It's Oh So Quiet video.

Other stuff: Boccabella was a career-long backup catcher for the Cubs, Expos and Giants between 1962-74.  He was selected by Montreal in the expansion draft in 1968. His claim to fame with the Expos was basically how the public address announcer pronounced his name when he came to the plate. It was very, shall we say, theatrical. 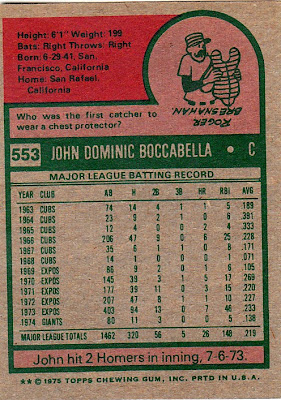 Back facts: That has to be the slowest route to 320 career hits in history.

Boccabella's two home runs in one inning came against the Astros. It was the sixth inning. He hit the first off of Jim Ray and the second off of Jim Crawford. The Expos scored eight runs in the inning and won 12-8.

Other blog stuff: Sean Spencer was born on this date in 1975. Another Yankee that went nowhere that I had to hear too much about from the New York hype machine.
Posted by night owl at 12:51 AM

Boccabella reminds me that sometime a player becomes locally famous for a name rather than talent especially when a team is below average. In Minnesota one such folk hero were the Twin's Bombo Rivera (an Ex-expo brought in to replace players lost to 1977 free agency).

That's not even a year and a half worth of hits for Ichiro.

I like the card back. Two homers in an inning and a little catcher history in the cartoon.

I got the '73 Boccabella from the MCG.

I never heard much about Sean Spencer, and I'm a lifelong Yankee fan. But SHANE Spencer had a hell of a run in '98.

Understood. I enjoy your blog. The 75 set was the first one I collected, and I completed it last summer. I'm originally from WNY also.

did you just reference Bjork on a baseball card blog? and "It's Oh So Quiet" without a dancing mailbox?

I almost linked. But I figured that would be too much.