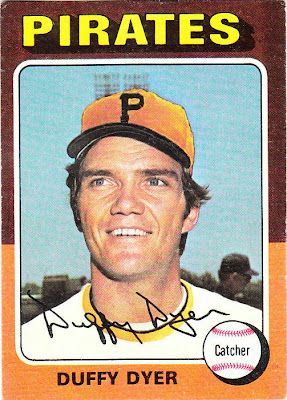 Card fact: Duffy Dyer is airbrushed into a Pirates cap (duh!). He was traded from the Mets to the Pirates in late October of 1974 for Gene Clines.

What I thought about this card then: I never saw it. But we thought Dyer looked very goofy on his 1976 Topps card.

Other stuff: Dyer was your typical "defensive catcher" between 1968-81. He played a supporting role behind Jerry Grote with the early 1970s Mets. He appeared for one at-bat in the 1969 World Series.

With the Pirates, he backed up Manny Sanguillen until Sanguillen was dealt to Oakland. Dyer then teamed with Ed Ott behind the plate. I always thought the Duffy Dyer-Ed Ott combination was the best catching platoon name combo in history.

After Dyer's playing career, he worked as a coach and manager in the A's, Cubs, Twins and Padres organizations. 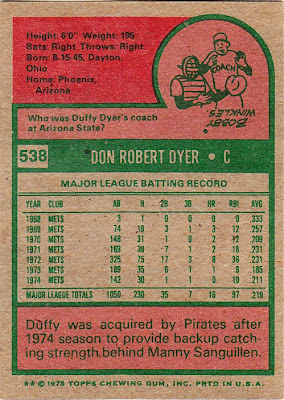 Back facts: Bobby Winkles was freshly fired from the Angels' managerial job when the 1975 set came out. He led Arizona State to the College World Series title in 1965, a team that included Rick Monday and Sal Bando, as well as Dyer.

Other blog stuff: I believe the site is back up to speed after Blogger's issues, except for the missing comments that Blogger says will be added by the weekend. If you see anything strange, let me know.
Posted by night owl at 12:31 AM

My friend and I elected Dyer in our inaugural class of the Backup Catcher Hall of Fame. Always liked him.

Ok, I see your comment about the missing comments. Well, it hasn't added them back yet. We'll see.

I never really saw Dyer except on some cards. I always liked him for some reason and we would trade his cards back and forth.

Dyer caught John Candelaria's no-hitter at Three Rivers Stadium on August 9th, 1976, which also happened to be the first baseball game I ever went to.