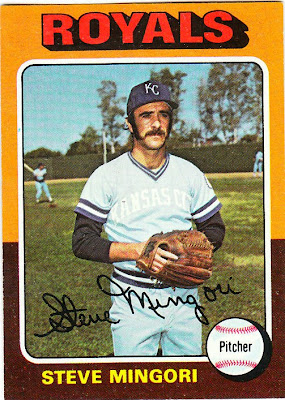 Card fact: The orange-brown border combination is back in the lead again with 47 total cards.

What I thought about this card then: I didn't see it. But the 1976 Steve Mingori card was a personal favorite, probably because I was influenced by my friend the Royals fan, and the fact that Mingori was left-handed.

The mid-to-late '70s Royals are one of my all-time favorite non-Dodgers eras. So folks like Mingori stand out to me.

What I think about this card now: I like the batter-pitcher confrontation going on in the background. They seem like the only two people on the field (or maybe the pitcher is really an infielder. It's hard to tell).

Mingori became a valued left-handed reliever for the pennant-winning Royals. He threw sort of side-armed, which complemented other righty relievers out of the pen like Mark Littell. Mingori appeared in seven games for the Royals in the postseason between 1976-78.

Mingori worked as a pitching coach with the Blue Jays after his playing career. He died in 2008 at age 64. 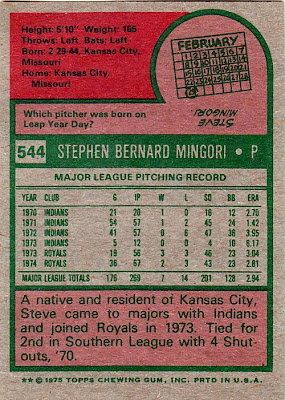 Back facts: Well, that's a cool cartoon. According to baseball-reference.com, 11 major league players were born on Feb. 29th, including Pepper Martin, Al Rosen and Terrence Long.

Other blog stuff: OK, this blog is dedicated to the '70s, so this is the only reason I would mention this. On this date 65 years ago, Cher was born.
Posted by night owl at 2:14 AM

Gotta love those sideburns. How many guys get a cartoon about themselves on their own card?