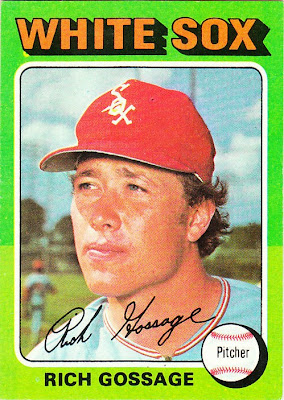 Card fact: You might expect the card to say "Goose Gossage," but card companies didn't start identifying Gossage as "Goose" on the front of cards until the mid-1980s when Fleer and Donruss began doing so.

What I thought about this card then: It seems a little odd to see Gossage without his trademark Fu-Manchu, but not terribly so, as my brother had this card and we were acquainted with Gossage before he went all New York on everyone.

What I think about this card now: Always liked the red White Sox caps.

Other stuff: Gossage was one of the most imposing relief pitchers of his time, part of a new breed of reliever that included Al Hrabosky, Rollie Fingers, Bruce Sutter and Sparky Lyle. Except for one season when he went 9-17 for the 1976 White Sox, Gossage was a reliever exclusively. He led the league in saves three times, the first time in 1975.

His best seasons came with the Yankees. He was famously signed by New York after the 1977 season, even though the Yankees already had Lyle, who had just come off a Cy Young-winning season in '77. Gossage took over the closer role with a standout '78 and became the Yankees' primary reliever through the 1983 season.

Gossage later pitched for the Padres, Cubs, Giants, Rangers, A's and Mariners until 1994. He was voted into the Hall of Fame in 2008. He makes many public appearances and is active in his community in Colorado Springs, Colo., which is where he grew up. 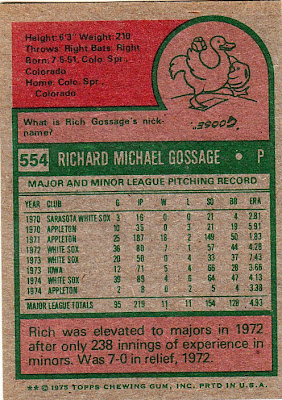 Back facts: That is some kind of season he had in 1971 at Appleton.

Other blog stuff: On this date in 1982, Cal Ripken Jr. began his consecutive games played streak by starting at third base against the Blue Jays.
Posted by night owl at 1:45 AM

Since I didn't start collecting until 1981, I'm still thrown every time I see the red cap on White Sox player. That 1971 season was amazing. He averaged almost 7.2 IP per game AND won 18 with that 3:1 K to BB ration.

Topps seemingly didn't like referring to a players by nicknames that weren't 1) derived from the player's real name or 2) something that was commonly used as a name. This was the case even if the nickname in question was in near-universal use among fans and the media. IINM, Mudcat Grant and Catfish Hunter were always Jim, Blue Moon Odom was always John, Oil Can Boyd was always Dennis, etc.

In 1977 when he was with the Pirates, they kept a live goose in a cage in the bullpen of Three Rivers Stadium in Pittsburgh.
I used to sit above it in right field all the time and throw down food for the players out there to stick in the cage. That poor goose sure ate a lot of snacks.