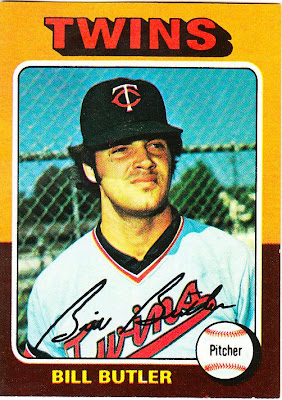 Card fact: The original Billy Butler! ... Actually, there was another Bill Butler besides this guy and the current Royals designated hitter. He was an outfielder for the 1884 Indianapolis Hoosiers of the American Association.

What I thought about this card then: I had the mini card. For some reason, I could never get it in my head that Butler was a pitcher. I always thought he was a hitter. And that was long before the current Billy Butler came along.

What I think about this card now: It looks like Butler has just spotted his nemesis across the way.

Other stuff: Butler pitched for seven seasons for the Royals, Indians and Twins. He was an original Royal, going to Kansas City from the Tigers in the expansion draft. He started 29 games for Kansas City in that first year in 1969, going 9-10.

Butler moved between the majors and minors the next four years, getting dealt to Cleveland in 1972. When he arrived in Minnesota in 1974, he seemed to find a spot in the majors for good, getting the occasional start for the Twins in 1974 and 75. 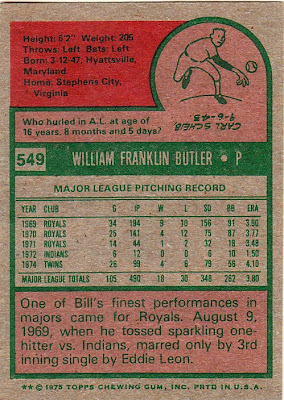 The Bill Bulter name is to KC what Dave Johnson is to baltimore and what Dave Roberts is to San Diego.

Butler reminds of the multiple attempts by the 1970's twins to resurect the careers of a castoffs from other clubs. Worked out incredibly well with Larry Hisle. To a lesser degree Tom Burgmeier and Geoff Zahn.

I unlocked this card and his 1970 card on the Diamond Giveaway site. You know, that Willie Mays will never make it. 0-5? Send him back down.