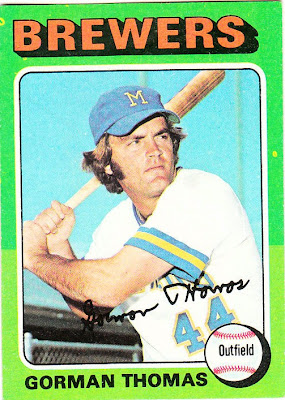 What I thought about this card then: Thomas was among those players that we poked fun at when we were kids. The combination of his first name and his .205 lifetime batting average at the time made him ripe for the picking. Little did we know that he would become badass.

What I think about this card now: It doesn't look like Thomas without the mustache and beard. By the 1976 card, he had the mustache, and by 1980, the beard was there.

Other stuff: Thomas was a big-time '70s slugger in the model of Dave Kingman. He hit a lot of home runs, his batting average was atrocious, and he struck out a bunch. But, unlike Kingman, Thomas managed to find himself a niche on a winning ballclub, as one of the primary hitters on the Brewers team of the early 1980s that eventually went to the World Series in 1982.

Thomas hit 45 home runs and drove in 123 in 1979 after struggling for six years to hang on with Milwaukee. He struck out 175 times that season and 170 the next, but between 1978-83, he put up power numbers that were among the best in baseball. He also played well in the outfield. I think young fans today would be surprised that he played center field.

Thomas was traded to Cleveland after the 1983 season and finished his career in 1986, partly with Seattle and partly back with Milwaukee. His lifetime batting average is .225. He remains popular with fans to this day and makes personal appearances for the Brewers. 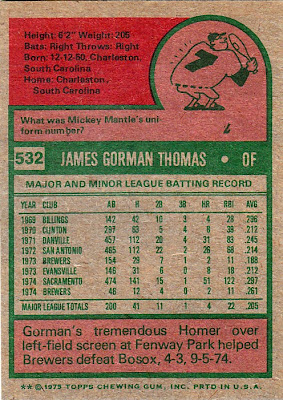 Back facts: Well, all of us collectors certainly know Mickey Mantle's uniform number now, don't we? Also, I think that is in a tie for the shortest answer of any of the cartoons in the set.

Other blog stuff: On this date in 1940, the Brooklyn Dodgers become the first team to fly, on an airplane flight from Chicago to St. Louis.
Posted by night owl at 1:48 AM

It looks so weird to me... so weird... UNNATURAL... to see Gorman Thomas without a stache.

Boy, Topps has been in love with the Mick for years, haven't they? I mean look at the size of that guy.

I think if you study the cartoon very carefully you might find a clue that'll tip you off to the answer to the question. But you've really got to be looking for it because it doesn't really jump out at you. Oh, wait ... yes it does.

Word verification: inget
As in "inget car the."

I'm surprised that there is no mention of Thomas' 51 hrs. in AAA in 1974 (albeit he played in a bandbox football stadium). A huge number yes but he was actually elipsed by teammate Bill McNulty with 56 hr.

I live in Milwaukee and he is prevalent representative of the Brewers.

I only remember the power Gorman so I was actually surprised about the struggles to hang on early in his career. I guess he just needed to go "Beardy" to get badass. As for the cartoon, I'm with Eggrocket on the subtlety of that cartoon. I'm surprised they didn't use that on card #7.

One look at Gorman Thomas in that pic, and you just knew he hit a lot of home runs.
I was always glad for the sake of the Expos he was in the AL. We had enough on our hands with Kingman the swingman, Mike Schmidt and Greg Luzinski....