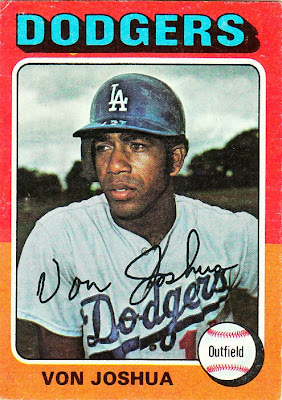 Card fact: This card is among the first five Dodgers I acquired in 1975, although I couldn't tell you how I received it.

What I thought about this card then: Always liked the helmet. It appeared shiny to me.

What I think about this card now: At this point, Joshua already had been featured on four Topps cards, which I think is a little strange considering he had no more than 159 at-bats in any season to that point.

Other stuff: Joshua was a backup outfielder for the Dodgers for five seasons until he was picked up on waivers by the Giants prior to the 1975 season. I became furious at the Dodgers for allowing Joshua to go to the enemy when he proceeded to bat .318 in 545 at-bats for Giants in '75. It's the first moment of hatred for the Giants that I can remember.

Joshua enjoyed three straight seasons as a starter -- two with the Giants and then one with the Brewers. But he returned to the Dodgers in 1979 and became a supporting outfielder again. His final season was with the Padres in 1980.

Joshua was a hitting coach in the Dodgers organization for nine seasons. He also worked for the White Sox, Blue Jays and Cubs. He became the Chicago Cubs' hitting coach in 2009 after Gerald Perry was let go. He has spent the last two seasons coaching for Iowa, the Cubs' Triple A team. 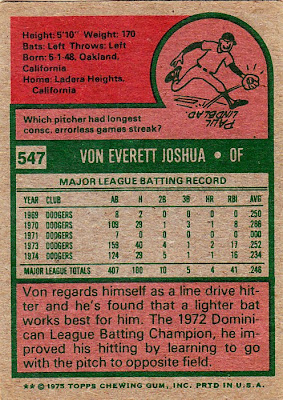 Back facts: The write-up reads like a how-to for beginning hitters.

Other blog stuff: You'll be happy to know that I made it through this post without my nose running all over the keyboard. I know that is TMI, but I just wanted to let you know what I go through for this blog.
Posted by night owl at 12:54 AM

He looks ever so contemplative in that picture. I think I just got sick from this post. Thanks for your sacrifice. I mean that.