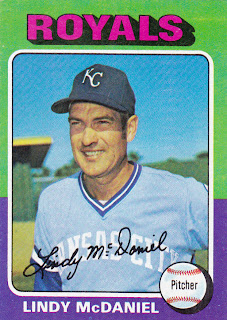 Card fact: This is the final Topps card issued during Lindy McDaniel's career. His last major league season was in 1975.

What I thought about this card then: My brother had this card. To us, McDaniel looked like the definition of a veteran major leaguer. I don't think we ever voiced it, but on the inside, we were thinking "now there's a guy who's been around and knows his ... uh ... stuff."

What I think about this card now: Whenever I see guys who played in the '50s wearing powder blue uniforms, it does not look right.

Other stuff: McDaniel pitched for 21 seasons in the majors, and is known as one of the greatest relief pitchers. He began with the Cardinals and started for them in 1957 and 1958. But after that he was almost exclusively a relief hurler. He led the league in saves in 1959, 1960 and 1963. His 1960 season was his best. He saved 26 games, recorded a 2.09 ERA, went 12-4, finished third in the Cy Young Award voting, and fifth in the MVP balloting.

McDaniel moved on to the Cubs and then the Giants and was effective throughout the '60s. But he returned to the level of his Cardinals days after being dealt to the Yankees for Bill Monbouquette in 1968. He enjoyed a stellar 1970 season, saving 29 games and recording a 2.01 ERA for New York.

After six years with the Yankees, New York sent McDaniel to Kansas City in the Lou Piniella trade. McDaniel pitched two seasons for the Royals before retiring.

McDaniel has his own web site, in which you can check out all his Topps cards.

McDaniel's 1971 Topps card happens to be up for a coveted spot in the esteemed Cardboard Appreciation Hall of Fame at Night Owl Cards. 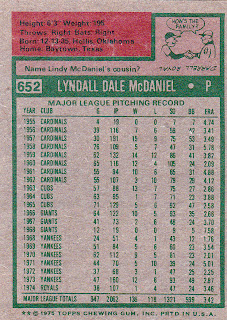 Back facts: This was my first experience with a player whose career was so long that the stats are crammed onto the back of the card. I had never seen so many years of stats until viewing the Lindy McDaniel card. Topps even squeezed the card number to get all the stats on the back.

Also, I know many, many people don't need an explanation as to who Darrell Royal is, but I sure did when I was a kid. Even today, as someone who pays very little attention to college football, I can tell you only the most basic facts about Royal.

Other blog stuff: The green-purple border combination is now in a first-place tie with the pink-yellow border combo with 55 cards apiece.
Posted by night owl at 1:40 AM

After checking out the Topps cards on Lindy's site, I wasn't aware that he had essentially the same combo card with Larry Jackson in 1961 and 1962.

I recently found out that the Brooklyn Dodgers used to wear a powder blue road uniform. So, it's not quire to weird for a player from the 50's to be in that color.

Personally I really REALLY miss the colorful uniforms from the 70's & early 80's. I really dislike the formal drabness of lots of teams nowadays. Baseball teams need to look fun! Of course, some teams uni's & logo's are just classic and should NOT be messed with, like the Yankees & Tigers.

I didn't realize he was around that long. The Cubs made out pretty well in trading him to the Giants with Don Landrum, getting Bill Hands and Randy Hundley in return. Hands won 20 games in 1969 and Hundley is still a Cubs legend.

He ended up with 141 wins and 172 saves. That's a very solid career. I want to say I was aware of him, but I'm thinking it's because of your Cardboard Appreciation post.

When the Yankees acquired McDaniel way, way back in 1968, I was disappointed. Nothing against McDaniel, but to get him they had to trade Bill Monbouquette. Monbouquette was my very first favorite Yankee player. Don’t know why, but probably because my seven year old self thought Monbouquette was a cool name. It turned out to be a steal for the Yankees, but i remember being heart broken when I asked my father why Monbouquette wasn’t on the Yankees anymore and he told me about the trade, it was my introduction to the business side of baseball and probably the first time the I grasped the concept of a baseball trade.