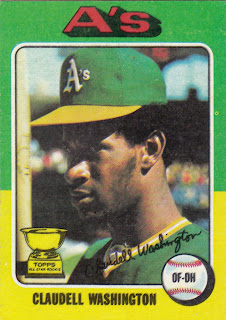 Card fact: Well, well, rookie cup, where have you been? It's been 135 cards since the last rookie cup. And this is the final Topps All-Star Rookie cup card in the set.

What I thought about this card then: My friend, the A's bandwagon fan, had this card. He instantly declared it cool. Who was I to argue?

What I think about this card now: For the first time -- and keep in mind I have seen this card for 35 years -- I am realizing that there is a bat in the photo. I don't know how I've missed that for so long. But it certainly makes Claudell Washington look that much more ominous.

Also, that signature is very tiny.

Other stuff: Washington was an instant success with Oakland. Picked up off the sandlots in Berkeley, Calif., as a 17-year-old, he was 20 years old when he reached the majors. A decent World Series showing in '74 (he was 4-for-7), signaled a star in the making. In 1975, he reached the All-Star Game during a year in which he hit .308 and racked up 182 hits.

But Washington couldn't sustain that pace throughout his career. He was traded five times during a 17-year career and signed as a free agent three other times. All told, he played for the A's, Rangers, White Sox, Mets, Braves, Yankees and Angels. He had some success with just about every team, although his time in Chicago was marred by an oversleeping incident, causing fans to roll out the "Washington Slept Here" joke.

Washington hit three home runs in a game twice, once in each league. He revived his up-and-down career during a five-year stint with the Braves, although that was also marred by confessions of drug use and a trip to a drug diversion program.

Washington finished up with some decent seasons with the Yankees. Of interest to no one but me, he was one of the final cards I needed to complete the 1989 Topps set. 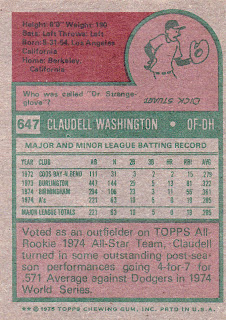 Other blog stuff: The 1974 Topps All-Star Rookie Team is complete. So let's have a look at it!


That's not an epic team, but everyone on that squad enjoyed decent and long careers. Some, like Tanana and Gross, remade themselves later in their career and extended it as a result. The average career span for the nine players is exactly 14 years.
Posted by night owl at 12:14 AM

The way he's holding the bat and almost staring at it reminds me of Pedro Cerranno from Major League.

I think that what's amazing here is that there was a minor league team in Coos Bay. That's a small place and far from any city of any size. We almost moved there back in, well, about the year it looks like Claudell was playing there.

A co-worker just finished up his last day here because he's taking a job in Coos Bay.

Gorgeous place, he/she will love it.
Also, if your coworker needs a home, Joe Rudi is in real estate out there, or so I heard.

Who is the weakest link on that team? Foote? Milbourne? Still not too bad though.