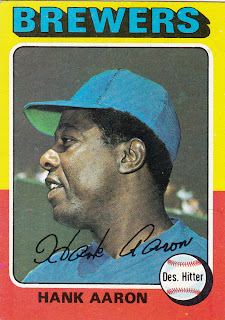 Card fact: Hank Aaron is airbrushed into Brewers gear after the Braves dealt him to Milwaukee on Nov. 2, 1974.

What I thought about this card then: Not much. I traded the Aaron card in order to get the '75 card of my favorite player, Ron Cey. It's just as well. The Aaron card was stolen goods as it came out of a pack that I shoplifted from a drug store.

What I think about this card now: Topps was getting collectors ready for what was in store for Aaron in 1975. Aaron had not played a game at designated hitter prior to his trade to the Brewers, but yet Topps is declaring him a designated hitter.

Other stuff: Topps book-ended the set with Hank Aaron cards at No. 1 and No. 660. It took me years to realize this. I just never figured Topps put that much thought into the set. But it's a nice tribute after Aaron's record-setting 1974 season.

The card is one of Aaron's least pleasing ones. Topps chose a photo that was easy to airbrush and it's kind of unfortunate that this is what came out the year after he broke the all-time home run record.

Aaron's also the only player in the set (discounting the MVP subset) featured with two different teams. 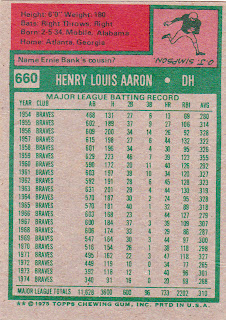 Back facts: Ernie Banks is misspelled. And an O.J. Simpson reference on the back of an Aaron card is a bit of a downer, although it was pretty impressive in 1974.

Other blog stuff: This is the final card in the set. But I'm not quite done. I need to wrap up all the categories, like I did every 100 cards. I'll devote tomorrow's post to that.
Posted by night owl at 2:03 AM

That is a full stat sheet and to see that homerun total for the first time must have been exciting at the time.

I guess having Ernie Banks and the as yet unsullied name of Simpson on the card was fitting for a superstar of Aaron's stature.

I'm looking forward to the wrap up post, but I'll say I've really enjoyed this set and reading about it from your point of view.
Bravo!

I've enjoyed the ride. Thank you for highlighting my all-time favorite set.

It's been a pleasure to read this blog. I'm sure I'll be suffering from withdrawals for a while now that it's over. Great job and thanks.

I always thought this photo belonged on a Hostess set that didn't have the rights to use team logos.

Yes, a disappointing card for one of the game's all-time greats.

I've remembered the Ernie/OJ connection for years after reading this card. It's a fun factoid that is still curious to me.


I agree, this blog has been fun to read partly because of the history of baseball, but more importantly because of your personal investment. While you relived your childhood I relived mine. There was a stronger conncetion than just a review of baseball cards.

Looking forward to your next project.

I have enjoyed this site and consider it the superstar of all card blogs for its incredible detail and consistency. Let's look at the stats: It all started on October 14th 2009, 713 days ago. Starting that day 661 blogs have been written (660 cards and one intro). That comes out to .927 blogs per day a record (if there is records on this) I'm sure that nobody has come close to!

An incredible pace for nearly two years. Look forward to your new project.

The '75 Aaron card brings back great memories for me. The first real superstar I ever pulled from any pack of cards. And at the time, nobody was a bigger icon than Hank, just coming off breaking the HR record. This card was the pride and joy of my (relatively small, at the time) collection for a very long time.

Excellent blog, Night Owl, about the best card set ever. Lots of great material (and great memories brought back reading it).

Topps made for a better Aaron photo in 1976. That's a great photo for a final card!!

Strangly, this ended up being the last card I needed to complete my set, and while it's definitely not the best card in the set, it is of the Hammer.

This blog inspired me to collect and finish this wonderful set. It awakened the little kid/historian in me. I'm now a set collector (working on a '73), and I owe that to you.

Loved this blog and will miss it when it's gone. It's been a fantastic journey and it inspired me to go out and purchase the set (I've always wanted it from when I was younger)

I look forward to the new project and once again, kudos for a fantastic job!