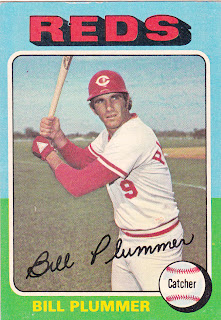 Card fact: We're getting down to the wire here. This is the last card featuring a photo of a player posing with a bat.

What I think about this card now: I upgraded this card a year or so ago after being blissfully unaware that there was a significant crease running through the right side of the card. This card has a little ding at the top, but I'm much happier with it.

Also, on many of Plummer's cards, he's featured with a major chaw in his cheek. I'm disappointed that isn't displaying one on this card.

Other stuff: Plummer spent most of his major league career as a back-up to Johnny Bench. He filled in for Bench between 1972-78. Plummer was your typical good-field, no-hit backup backstop. He finished with a career .188 batting average after 367 games between 1968-78.

Plummer played his final season with the Mariners in 1979. He then went into coaching in the Seattle organization. He later worked as a third base coach for Seattle, then managed them for a year in 1992 before the Mariners hired Lou Piniella.

Plummer went on to manage in independent leagues (he managed a player from my area, and I had planned to talk to him about the player. But the player was notorious for not wanting to talk about himself, so the story never happened and I never talked to Plummer). He is now an instructor in the Diamondbacks organization. 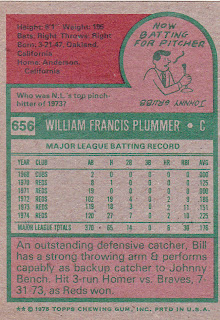 Back facts: The write-up reads like an explanation as to why Topps is giving Plummer a card.

Other blog stuff: Dodger blue legend Tommy Lasorda was born on this date. He is 84 years old.
Posted by night owl at 12:28 AM

It looks like it's about half a mile to the fence in that park. I like catchers, but they were stretching a bit giving him a card.

I once read an article in which it stated that a Reds coach (Alex Grammas?) once said that Plummer could be a starter for a lot of teams. With an average of .188, that seems unlikely.
Don't get me wrong. I liked Plummer and elected him into my Backup Catcher Hall of Fame, but I doubt he would have started for most teams.

ah, Bill Plummer ... a Reds catcher in the 70s. And for all of us chasing Bench cards, the very bane of our existence.

In 1970's baseball, you couldn’t be any more of a back-up than being Johnny Bench's back-up. It was like being Lou Gehrig's back up on the 1930's Yankees.