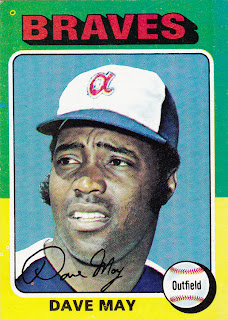 Card fact: This is the last of five players with the last name "May" in the set. The others were Lee, Carlos, Milt and Rudy.

What I thought about this card then: My brother had this card. We thought the card was weird and May a bit odd-looking. It's not the most flattering photo.

What I think about this card now: May is airbrushed into a Braves cap and jersey because he was JUST TRADED FOR HANK AARON.

Other stuff: May was an outfielder who came up with the Orioles. He didn't hit a lot with Baltimore and was traded to Milwaukee, where he became a productive offensive threat. In 1973, he enjoyed his best season, hitting 25 home runs, knocking in 93 and hitting .303.

In 1974, he fell off quite a bit, batting only .226. That led to the trade that made May an answer to a trivia question: "Who did the Braves acquire in a trade for Hank Aaron?" May was dealt to Atlanta, along with player-to-be-named Roger Alexander, for Aaron on Nov. 2, 1974.

May played only part-time for the Braves for two seasons, then was traded to Texas in another big deal as the Rangers shipped Jeff Burroughs to Atlanta. May spent one year with the Rangers, then returned to Milwaukee and finished his major league career in Pittsburgh in 1978. 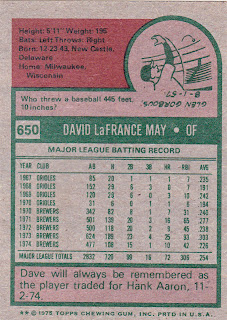 Back facts: Well, Topps was a bit bold with the write-up, but it's spot-on. That is what people know about Dave May.

Also, if the cartoon leaves you wondering and you have all the time in the world, here is far too much information, on baseball's longest throws. Glen Gorbous is mentioned somewhere in there, eventually.

Other blog stuff: On this date in 1975, Mets rookie Mike Vail extended his hitting streak to 23 straight games. This is one of the earliest baseball-on-TV viewing memories that I have.
Posted by night owl at 1:27 AM

To me, he'll always be the guy who was traded for Jeff Burroughs. Even though I didn't know that until 2 minutes ago. You have to wonder how he got that middle name. Was his Grandma's name Viva?