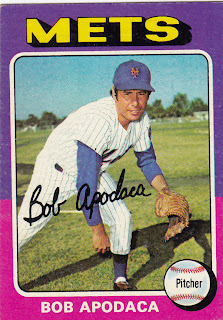 Card fact: This is Bob Apodaca's first solo card. He appears on a four-player rookie card in the 1974 Topps set (there is both an error version and corrected version of his '74 card. His name is spelled "Apodaco" in the error version).

What I thought about this card: I didn't see it.

What I think about this card now: It's always interesting seeing the penultimate card in a set. Beyond that, no thoughts.

Other stuff: Apodaca pitched five seasons in the major leagues, all for the Mets. I relate him to those mediocre Mets teams of the mid-to-late '70s.

Apodaca was a coach for the Mets organization throughout '80s and '90s, including the Mets' big league pitching coach in the late '90s. He's been the Rockies' pitching coach since 2003. 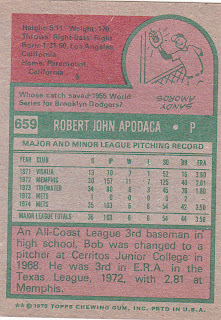 Back facts: Another Dodger cartoon. One day I'll count them all, but there has to be at least 20 or 25.

Also, the Apodaca's non-existent ERA in 1973 would have mystified me as a boy. Apodaca pitched to two batters, allowed a run and didn't get anyone out for an ERA of infinity in his only game in the majors in '73.

Other blog stuff: Tomorrow is the final card in the set. Gee, I wonder who it is?
Posted by night owl at 12:03 AM

I've heard of him, but until you mentioned he was the pitching coach for the Rockies, I forgot about seeing him last year at the Rockies game. That means nothing to anyone, even to me, but I saw him at the game.

I WILL NOT CRY!

Well, after tomorrow I don't know how I'm going to start my day every morning. I hope the sabatical between the 1975 blog and the mystery-year blog isn't too long!

I wondered if he ever pitched to Biff Pocoroba?