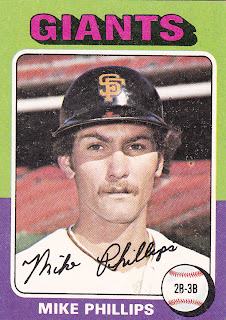 Card fact: This is the only Topps card of Mike Phillips in which he is wearing a mustache. He has 11 Topps card and in 10 of them, he is clean-shaven.

In fact, he looks so different on this card that I've often wondered whether Topps took a photo of someone else by accident. But I've looked the card up in a number of price guides and hobby publications and there is no mention of an error or otherwise.

What I thought about this card then: My brother had the card. I thought Phillips looked cranky.

What I think about this card now: Anytime I see a head shot with the player wearing a batting helmet, it looks strange. If you're wearing a helmet, you should be doing something.

Other stuff: Phillips, a No. 1 draft pick of the Giants, spent 11 seasons as a backup infielder for five teams -- the Giants, Mets, Cardinals, Padres and Expos. His only season of regular play was in 1975 when he played in 126 games for the Giants and Mets.

Phillips played most of his games at shortstop, but he was also used often at second and third base. He didn't hit much, batting .240 for his career. 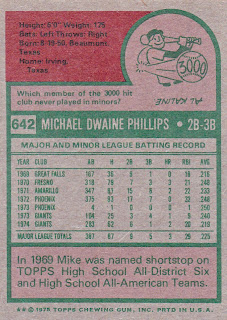 Back facts: Ouch. The mention of high school exploits on the back of a major leaguer's card always makes me cringe. Surely he did something in the minors worth noting. He had three home runs by that time. Write about that.

Other blog stuff: Former SNL comedienne and "ignorant slut" Jane Curtin was born on this date in 1947.
Posted by night owl at 12:39 AM

Alright, a Texas boy born one day after me...and 20 years earlier. Terrible card though. That photo looks like a mug shot.

Only 18 posts left. Man, I'm gonna miss this blog. You have to do another year.

One thing Mike Phillips did in his Major League career was hit for the Cycle. He was playing for the Mets, in a game vs. the a Cubs At Wrigley Field, a game I watched on WOR. First time I ever saw a cycle and it seemed to be a big deal at the time. I’ve come to think of it as a kind of overrated accomplishment, more a novelty than something real, like a no-hitter.