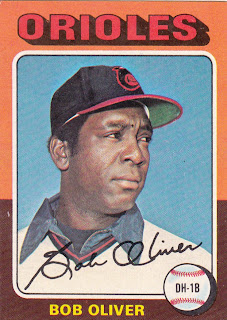 Card fact: This is the last Topps card issued of Bob Oliver during his career.

What I thought about this card then: This is one of the first cards I ever saw in 1975. It came out of my brother's first packs of cards. It's still strange to see this card with sharp corners and no scuff marks, because in my mind, the Oliver card I see is my 8-year-old brother's card.

Oliver has the honor of being one of the first cards I saw in my first two years of collecting. In 1974, the year in which we received some cards from my mother and threw them away at the end of the season, Oliver's card is one of my early memories.

What I think about this card now: Oliver is airbrushed into an Orioles cap. He was traded from the Angels to the Orioles in September 1974. The bird logo on Oliver's cap is freakishly huge.

Other stuff: Oliver made a brief appearance with the Pirates in 1965, then didn't resurface in the majors until 1969 after he was picked up by the expansion Royals.

He was a key offensive component of the Royals, enjoying a breakout year in 1970 when he drove in 99 runs. He was dealt to the Angels in early May of 1972, and he produced a powerful 1973 season for California.

After that, he settled into a utility role for the Angels, Orioles and Yankees, finishing up in 1975. He later managed in an independent league and operated his own baseball school. Oliver is the father of longtime lefty hurler Darren Oliver. In fact, both Olivers were teammates of Nolan Ryan during their careers. Back facts: Topps goes through all of that trouble painting that giant smiling birdie, and the Orioles go and trade him to the Yankees before the card even hits the stores.

Other blog stuff: I'd like to direct your attention to the "Reeling in the Years" segment on the sidebar. It lists all of the set-related blogs of which I'm aware. Some haven't been publishing for awhile. But several have been added since the start of this blog, including most recently, the 1986 Topps blog, which is a blog I actually considered starting myself at one time.
Posted by night owl at 12:32 AM

At times this year, I've been a proponent of the Rangers shipping Bob's son off to some remote island. Thanks for the "reeling in the years" list. I wasn't following all of them.