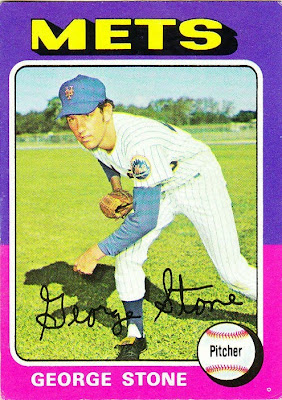 Card fact: This is the second-to-last card issued of George Stone during his playing career. He would appear on cards in the 1976 Topps and SSPC sets, but Stone didn't play in the majors after 1975.

What I thought about this card then: I distinctly remember pulling this card out of a pack as I walked along a city street in Binghamton, N.Y., returning home from the drug store. I liked the Mets a little bit when I was a kid, so I appreciated this card. I'm not sure what happened to the one that I pulled from the pack. When I went about completing the set a few years ago, finding this card brought back a flood of memories.

What I think about this card now: The card is not as I remember seeing it as a kid. It's obviously a sunny day in the photo, but my memory of the Stone card has him posing with a dark background.

Other stuff: George Stone pitched mostly as a starter for nine seasons in the major leagues, appearing in the 1969 NL playoffs for the Braves and the 1973 NL playoffs and World Series for the Mets. He was traded from the Braves to the Mets, along with Felix Millan, for Gary Gentry and Danny Frisella. That deal worked out pretty well for the Mets.

Stone spent much of the 1975 season on the disabled list. During February of 1976, he was traded to the Rangers for Bill Hands. But Stone didn't pitch for the Rangers.

Stone is the cousin of former major league pitcher Cecil Upshaw, which is mentioned on Upshaw's card. They played on the Braves together from 1967 to 1972. 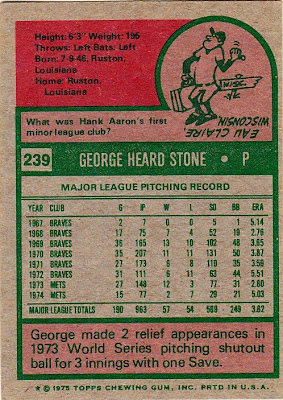 Back facts: "Save" is not capitalized.

what the hell, man?? whenever i read this blog, I know it's time to go to bed.

CC: Last day of my vacation. Things operating a bit oddly this week.

I was a little taken aback by the un-'75 like non tilted background. Welcome back!