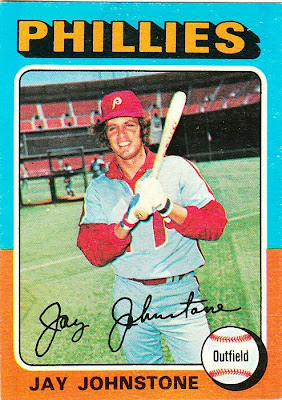 What I thought about this card then: Never saw it. The first Johnstone card I saw was the following year, 1976.

What I think about this card now: It's appropriate that Candlestick Park is tilted on the card of a known "flake."

Other stuff: Johnstone is another one of those flakey baseball characters from the 1970s and 1980s. Johnstone played nearly 20 years and bounced around between eight teams, but he received much of his publicity during the three-plus years he spent with the Dodgers. As part of a goofball foursome that included Rick Monday, Jerry Reuss and Steve Yeager, Johnstone was the head prankster on L.A.'s teams of the early 1980s.

Johnstone was known for harrassing manager Tommy Lasorda -- he once replaced all of the photos of celebrities in Lasorda's office with pictures of himself, Reuss and reliever Don Stanhouse. He seemed to enjoy dressing up in goofy costumes, and the first time I remember hearing about a teammate nailing another teammate's cleats to the floor, Johnstone was the perpetrator.

Johnstone also made an impact on the field. He was a solid-hitting role player who enjoyed several above .300 seasons. He delivered a pinch-hit homer in Game 4 of the 1981 World Series against the Yankees that helped the Dodgers rally to win that game. Johnstone later worked as a baseball announcer.

Johnstone also appeared in a couple of movies, including a short appearance in "The Naked Gun." Personally, I think he would have been a dead-ringer for Murdock in "The A-Team" movie. 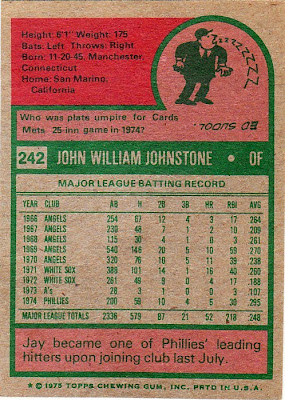 Back facts: I'm not sure what happened with Johnstone in the 1973 and 1974 seasons. He played very sparingly in 1973 with Oakland after being released by the White Sox. The Cardinals purchased him in the winter of 1974, then released him, and Johnstone was signed by the Phillies in April. But the write-up on the card says he joined the Phillies in July. Perhaps he was in the minors? I'm too sleepy to research it.

Other blog stuff: A good day for the Orioles on this date in 1975. Catcher Dave Duncan hit four consecutive doubles to tie a major league record in an 8-2 victory over the first-place Red Sox. In the same game, a liner off the bat of Tony Muser broke the cheek bone of Red Sox pitcher Dick Pole. Meanwhile, the Brewers rallied with two runs in the bottom of the ninth to beat the Yankees 5-4.
Posted by night owl at 12:43 AM

Johnstone spent a short time with a Phillies' minor-league team before baing called up. He became the regular rightfielder for a few seasons, before being replaced by Bake McBride midway through the 1977 season.

In one game against the Pirates, Johnstone (while playing right field) sneaked in to first base, took a snap throw from the catcher, and picked the Pirates' baserunner (Frank Taveras, if I recall) off of first base.

I only remember him as a Dodger. I hadn't heard about the photo trick on Lasorda though. Good story from Jim on the Pirate pickoff.

According to baseball-reference.com, Johnstone's first appearance of the 1974 season in the majors was on July 6. He played in 57 games at AAA Toledo that year (versus 64 in the majors), so it looks he had been in the minors up to that point in the season.

In '73 with Oakland, Johnstone played in 29 games in the majors versus 69 at AAA Tuscon. All of the games that he played in the majors were in April, May and July. He did not appear at the major league level after July 30. Johnstone would have still been with the A's organization as Topps was preparing its '74 set, but they presumably omitted him either because he hadn't played enough in the majors in '73, or didn't seem like a safe bet to see significant time on a major league roster in 1974, or both.

As for why Johnstone wasn't included in the '73 set: He spent the entire 1972 season in the major leagues, appearing in 113 games for the White Sox. But he only had 290 at bats, and racked up a .188 batting average. Then, in early March 1973, the White Sox released him. I don't know what Topps' schedule was in those days for compiling their set (they were still issuing the set in multiple series at that point), but my sense is that they generally avoided players who had been released.

1973 and 1974 were the only years after 1968 that Johnstone played in the minors. After looking like a solid major league regular during the 1969-71 period, it seems like he had a bit of a career crisis around the 1972-74 timeframe, where his future as a major leaguer may have seemed questionable. But he ultimately pulled through it, and went on the play many more years in the majors.

you are a better man than me, i can never say or type the name "Dick Pole" without reacting like an 8 year old.

I recommend reading his several books which chronicle his years with the Dodgers and list many of the pranks he played. Very funny stuff.

He once brought a vial of apple juice to the nurse for a urine test he had to take, and said to her "Looks a little cloudy, I'll run it through again" and drank it as the nurse practically had a heart attack.