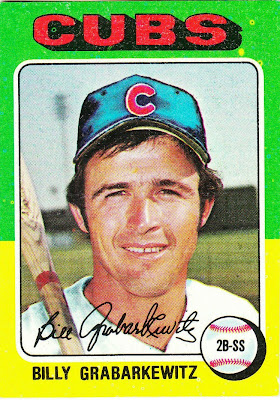 Card fact: This is the last card issued of Billy Grabarkewitz during his career.

What I thought about this card then: I thought it was pretty cool for a reason that I can't explain now. I don't think I noticed the atrocious airbrush job on the cap at all.

What I think about this card now: I am wondering which team's uniform Grabarkewitz is wearing. He played for a series of teams in a short period of time before this card -- the Dodgers, Angels, Phillies -- it could be any one of them.

But Grabarkewitz would never play in more than 87 games in a season again and he hit above .247 only one other season in his career. After the 1972 season, Grabarkewitz was in the trade that sent Frank Robinson, Bill Singer and Bobby Valentine from the Dodgers to the Angels in exchange for Andy Messersmith. 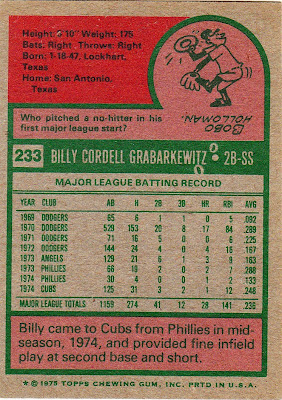 Back facts: How much do you think Bobo Holloman's rookie card would be worth if he pitched a no-hitter in his first major league start in 2010?

Other blog stuff: All right, this color combo still doesn't have a name. I'm going to take care of it by naming it the "Lymon/Sprite" combo, as I threatened to do a little while ago. If someone, including me, comes up with something better, I'll change it. But "green-yellow" is now the Lymon/Sprite combo on the sidebar.

One more color combo left to name.
Posted by night owl at 1:46 AM

That is one bright airbrush job. I think it's amazing he ever signed his whole last name to anything.