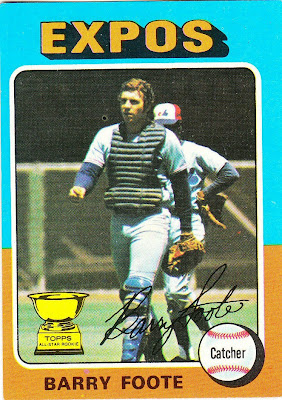 What I thought about this card then: Remember last post when I said that I recall ordering another card along with the George Brett card? Well, this is the card. By a total coincidence, the two cards are numbered back-to-back.

The reason I specifically ordered a card of a back-up catcher comes out of my first visit to the Baseball Hall of Fame in either 1975 or 1976. There was a display of the entire 1975 set in a downstairs floor of the Hall. I soaked up all the cards and I specifically noted the Foote card. I thought the game "action" in the photo was totally cool. I admired the memory of that card for a long time. And when I got old enough to earn money and order cards through the mail, this is one of the cards I ordered. Youth wasted on the young, I guess you could say.

What I think about this card now: I wish I could determine who that player was behind Foote. Also, this is another one of many Topps cards taken in San Francisco's Candlestick Park.

Other stuff: Barry Foote started out as a starting catcher for the still fledgling Expos, but after a few years he settled into a backup role. Except for 1979, when he caught for the Cubs, most of Foote's post-1976 years were spent as a backup catcher for various teams through 1982. He later became a coach and a manager. 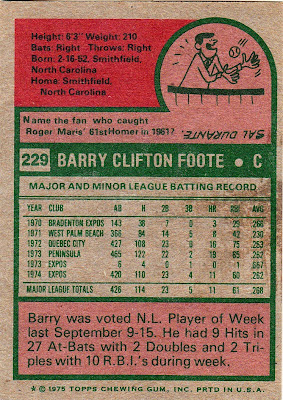 Other blog stuff: Time to add the catcher to the Topps All-Rookie team for 1974:

I do believe we've come to our first weak link on the team.
Posted by night owl at 1:58 AM

Didn't a lot of gentlemen wear their Sunday best to games back in that era? I love the old catchers gear! Most Little League catchers wear better chest protectors than that nowadays.

That has to be either Pepe Frias or Larry Lintz.

Great card. Sort of an action shot (sort of) but one that has a great look at the guy's face. And the rookie cup, AND the facsimile sig...close to an ultimate card of its era...