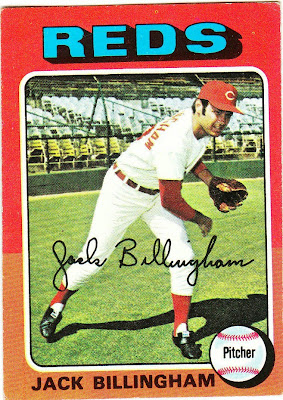 Card fact: This is just the eighth card in the set displaying the red-orange color combo (the "Burger King" combo). It is the least featured color combination so far.

What I think about this card now: It's in need of some upgrading. It's a bit worn on the edges and miscut.

Other stuff: Jack Billingham was at the height of his career in 1975, having just won 19 games in back-to-back seasons. He remained a solid starting pitcher for the Reds when they won back-to-back World Series titles in 1975-76. After being traded to the Tigers, he enjoyed another good season for Detroit in 1978 before eventually reaching the end of his career in 1980.

Billingham began his career as a reliever with the Dodgers. But he was taken by the Expos in the expansion draft, then sent to the Astros. Billingham went to the Reds in the deal that also brought Joe Morgan and Cesar Geronimo to Cincinnati -- a major steal for the Reds. 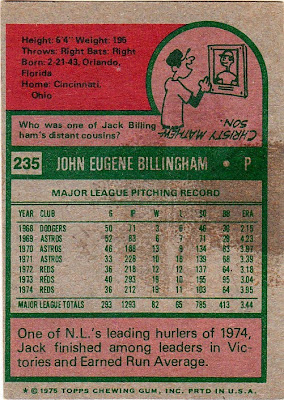 Back facts: Not much to say here. Even about the fact that Billingham is a cousin of Christy Mathewson. Just too tired, I guess.

When I put together my 1975 Topps set, Billingham was one of the last darn cards I needed. I remember going through commons boxes at the National in Chicago a few years ago trying to find one. I'm not sure if being a Reds player contributed to the fact that I couldn't locate one or the fact that -- as a common -- sellers just didn't bother with him like they did the stars.

In the end, a collecting buddy found one and gave it to me. It wasn't the last card I needed (Dwight Evans was) but Billingham was one of the last 5.

He had some really nice seasons. I've never heard of him, but that's true for many of those 70's guys.

The Matthewson bit is pretty interesting. I'd love to be able to say that. My closest relative in the big leagues played in a grand total of 25 games in the Federal League in 1914-1915.

That baseball "trivia" would probably work better in ...say ... the 1970 or 1973 sets where the cartoon was something about the player on the front. I wonder how many players in the 1975 set are featured in the trivia question on their own card. (hint, hint)

I was 9 years old when JAWS came out, and it scared the crap out of me. I didn't even want to get in the bath tub after watching that movie.