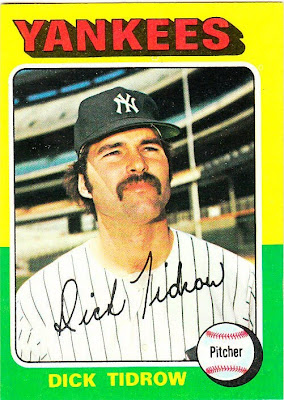 Card fact: This is Dick Tidrow's first card as a Yankee and his first card in which he's wearing a mustache.

What I think about this card now: Yankee Stadium is a little tilted.

Other stuff: Dick Tidrow built his reputation as a reliable set-up reliever for both the Yankees and the Cubs. When he was with New York, I would always get him confused with Sparky Lyle -- another mustachioed reliever on the Yankees.

Tidrow came to the Yankees from the Indians in a trade that also brought Chris Chambliss to New York. The Indians ended up with Fritz Peterson, Steve Kline, Tom Buskey and Fred Beene. It didn't work out very well for Cleveland. But nothing ever did in the 1970s.

Tidrow is now the scouting director for the Giants. The Dodgers beat your team tonight, Dick.
(EDIT: Dick Tidrow died at age 74 on July 10, 2021). 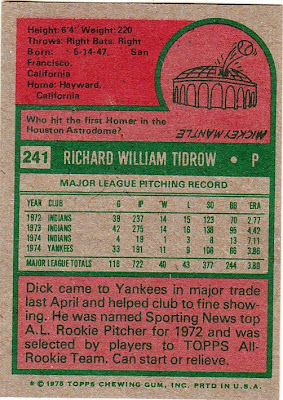 Back facts: You may be asking how Mickey Mantle hit a home run in the Astrodome in the days before interleague play. It was an exhibition game on April 9, 1965. Mantle hit it off of the Astros' Turk Ferrell.

Other blog stuff: The No. 1 song in the country on this date in 1975 was "Love Will Keep Us Together," by the Captain and Tennille. Toni Tennille received some heat back in 1980 when she sang the National Anthem for the All-Star Game at Dodger Stadium. People accused her of lip-synching, but that wasn't true.
Posted by night owl at 2:07 AM

I think the yellow-green combo is perfect for the Yankees. And hasn't Yankee Stadium alwasy been tilted?

That's Shea Stadium. If you recall, the Yanks played at Shea in 1974 and 1975 while Yankee Stadium was being renovated.

I love the way Topps mentioned Tidrow was a member of their '72 All-Star Rookie team. They hadn't been bothered to actually put a trophy on his '73 card.

He was one of four members of the '72 team to go without a trophy (Garry Maddox, Don Baylor and Tom Hutton were the others).