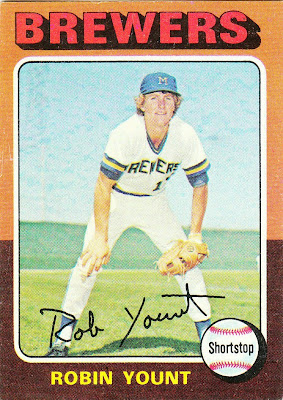 Card fact: All things being equal (i.e.: card condition), this is the most expensive card in the set.

What I thought about this card then: I had this card as a youngster. Not sure what happened to it. Don't recall thinking much about it.

What I think about this card now: Well, I can tell you what I thought about it when I was completing the set in 2004: "Damn, I had this card when I was little and I traded it away and now it's going to cost me a bunch to get it in anything resembling decent shape."

It did cost me. I waited a long time to buy it. It was one of the last cards I needed for the set. I set aside the day I bought it as my "Robin Yount Rookie Card Purchase Day."

Other stuff: It's not often that you see an 18-year-old on a major league baseball card -- or it wasn't until the 1990s, anyway. So that is a big reason why this card is so valued. Of course the other reason is it is a rookie card of a Hall of Famer.

I vividly remember when Yount made news because he said he was going to quit baseball and become a professional golfer. I knew nothing about golf then and I thought it was the most ridiculous thing that anyone had ever said. I remember thinking, "if Yount becomes a pro golfer, it will be the dumbest move ever." I couldn't fathom anyone wanting to leave baseball.

Oh, and Yount just doesn't look the same without that trademark mustache. 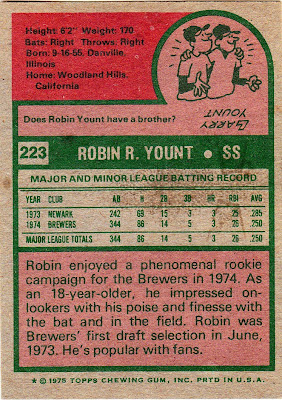 Back facts: I think it's quite appropriate that the Yount card is featured on the day after the Nationals selected 17-year-old Bryce Harper first in the MLB draft. Let's see if Harper can make to the majors by the time he's 18 like Yount.

The cartoon question is very random. "Does Robin Yount have a brother?" Larry Yount, Robin's older brother, was a major league prospect with Houston. A little detail in the cartoon would have helped.

Also, how cool is it to have a single initial for your middle name?

I'll answer that. It's very cool.

I felt the same way you did about Yount's proposed career change.

I wonder how many teams would have been as patient with Yount as he developed in the major leagues.

I can remember trying to complete my mini set, and the last card I needed was the Brett rookie. At the time it was going for $30.00 in mint condition. I thought it was nuts to pay $30.00 for that card, but I did it anyway.

Interesting that he signed his name "Rob" Yount. Most players have longer or more formal signed names, i.e. "Ernest" rather than Ernie Banks. Did Topps clip the "i n" off Robin? Does he go by ROB?

Weird background in this one, never noticed that before.

I love the throw in comment at the end of the writeup. "He's popular with the fans." That's generic. I think they might say that about Harper or Strasburg.

Bummer of a wax or gum stain on the back.

Good point about how they should have added some detail about his brother being a ballplayer. Also, technically, the answer should have at least started with "Yes"....