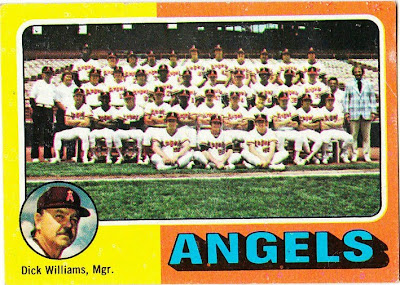 Card fact: Dick Williams was the third of of three managers for the Angels in 1974, so I wouldn't be a bit surprised if Williams is airbrushed into his Angels cap. It looks fairly legitimate, but I don't have the card in hand now to give it a good study.

What I thought about this card then: Team card. Zzzzzzzzzzz.

What I think about this card now: I'm having a hard time believing the guy in the blue plaid sport coat is an actual member of the club. It looks like the team was doing some charity work and took the guy in off the street.

Other stuff: The Angels out-and-out stunk in the mid-1970s. In 1974, Bobby Winkles wasn't getting it done, so he was canned and replaced with coach Whitey Herzog, who managed four games on an interim basis. Williams then finished out the season and lasted until the middle of the 1976 season, when the Angels continued to emit a putrid odor and replaced Williams with Norm Sherry.

Keep this in mind: all of this happened with Nolan Ryan pitching for the team. Frank Tanana, too.

Of course, Williams went on to manage the Padres, Expos and Mariners, and also led the Red Sox and A's to the World Series. The Angels were probably the low point of his Hall of Fame career. 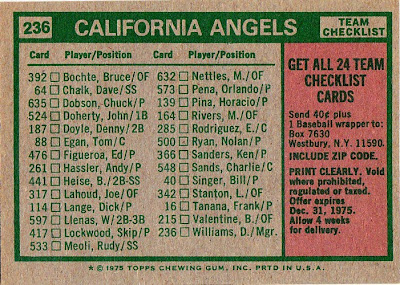 Back facts: I count at least six or seven players on this checklist whose photos are airbrushed in this set. The Angels made quite a few transactions around this period.

Other blog stuff: Let's see if Topps left off anyone important from the 1974 Angels team when it put out the 1975 set.

The Angels used a whopping 45 players in the 1974 season, the most of any team that has been featured so far. Topps did its best and put 31 of those players in the 1975 set. Five of the players are airbrushed into other uniforms as Frank Robinson, Bob Oliver, Tom McCraw, Sandy Alomar and Rudy May all left the team in deals.

Topps didn't miss anyone notable. Paul Schaal played more games at third base than any other player for the Angels in 1974, but it amounted to just 165 at-bats and he didn't play after 1974.

So with all those players, Topps managed to feature 68.89 percent of the 1974 Angels in the 1975 set. Here is where the Angels rate with the teams mentioned so far:

Now that you've mentioned the guy in the suit (probably the team's traveling secretary, they always seem to show up in team photos), I can't help but notice that awesomely 1970s pattern whenever I look at the picture on the card.

The first thing I noticed was the guy on the other end in the nice black pants with the white belt. I didn't realize the Ryan Angels were so terrible.

the angels had some good pitchers -- they just had no offense. A whole bunch of their position players are pictured in a bunting pose in the 1976 set and that looks about right for their offense.