Card fact: This is the sixth card of someone named "Jim." That falls behind "David," "Bob" and "Joe." But shockingly there's been just one "Mark" in the set so far.

What I thought about this card then: No thoughts. Didn't see it.

What I think about this card now: I like the distant Coca-Cola advertisement in the background. Now THAT is subliminal advertising. 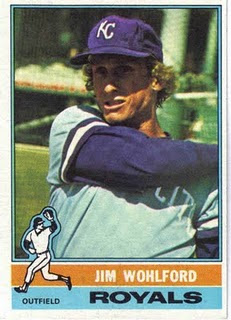 That is significant, because I thought he looked exactly like my friend, Jeff, the Royals fan from Kansas. And I found it interesting that there should be someone on his favorite team that looked liked him. Now, you can say what you want about how dopey Wohlford looks, but you leave my friend Jeff alone.

Also, because Wohford and George Brett both had long blond hair and played for the Royals, I would get them confused. Really.

Anyway, Wohlford was coming off the best season of his career in 1975. In 1974, he reached 500 at-bats for the only time in his career. He would never even reach 400 at-bats the rest of his time in the big leagues, even though he played until 1986. He was known as a defensively skilled outfielder.

Wohlford also claimed in a Chicago Tribune article that he was the one who said, "Ninety percent of this game is half-mental," not Yogi Berra. 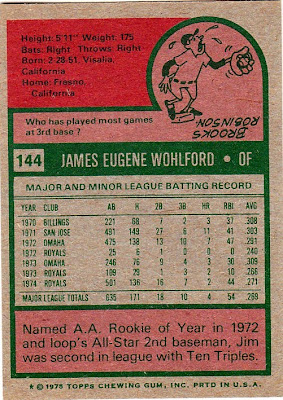 Back facts: Did Brooks Robinson really cry about the fact that he played all those games at third base? I think he LIKED doing it.

Other blog stuff: The No. 1 song on this date in 1975 was "Black Water," by the Doobie Brothers. Good song, especially for 1975 when there was an awful lot of junk on the pop charts.
Posted by night owl at 2:30 AM

One of the best parts in the Bronx Zoo was that any time Pinnella would get on someone, they'd usually come back with "Jim F-ing Wohlford", since it enraged him that he was replaced by such a non-talent.

That and the fact that Lou had an odd habit of smelling his hair.

All apologies to Jeff, but Wohlford was a goony dude.

Although he did make me yearn for some A-1 steak sauce. Wonder why.

If you want players named "Jim", take a gander at the 1967 Minnesota Twins' pitching staff. Counting Jim "Mudcat" Grant, 6 of the 10 pitchers are named Jim!

I'll never forget that time Jim came racing out of the dugout after Billy had his bat checked for pine tar......oh wait.