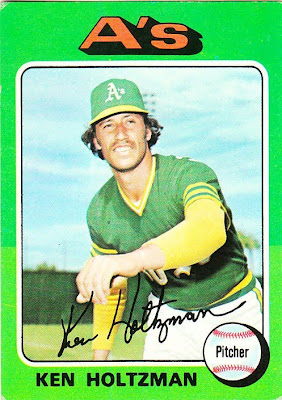 Card fact: One of the most pleasing cards in the set. A top-notch pitcher of the era, who played on a World Series winning team, featured on a card with a border color that complements his uniform and team colors.

What I thought about this card then: One of my favorites. In my mind, Holtzman was actually much, much taller than he appears on this card. Also, when I looked at the card, I pictured him pitching from about 6 feet up. I am surprised when I see the card now and realize Holtzman is obviously at ground level.

The picture of Holtzman represents everything that I thought was cool about a pitcher at the time.

Also, and this has nothing to do with what I just said, but I cannot think of this card without also thinking of the frogs that we caught in our backyard. We would corral them and force them to live in a habitat devised by 9-year-olds, which basically was grass and twigs in a sand bucket. We'd care for the frog for three days and then wonder on the third day why the frog was dead.

What I think about this card now: I love it because it reminds me of my childhood more than almost all of the cards in the set.

Other stuff: Ken Holtzman was a standout pitcher for the Cubs in the 1960s. The fact that he was Jewish made for interesting comparisons to Sandy Koufax (they are both left-handed, too). Holtzman couldn't match up to that, but did pretty damn good. He threw two no-hitters for the Cubs -- against the Braves and Reds -- and then was traded for Rick Monday just before the A's began their dynasty.

Holtzman was a key starter for those Swingin' A's teams and even hit a home run in the 1974 World Series against the Dodgers (boooo!!!!). Later, Holtzman was sent to the Orioles as Charlie O. began his fire sale. The Orioles didn't keep Holtzman too long, sending him to the Yankees. Holtzman struggled with New York, got on Steinbrenner's bad side and ended up finishing his career back with the Cubs. 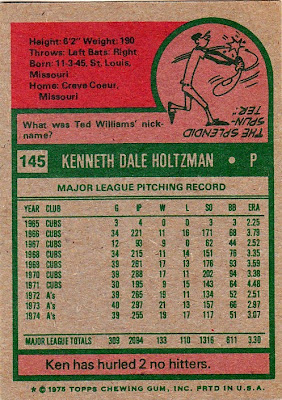 Back facts: Does "splinter" mean you have a rubber bat? I've never understood that cartoon.

Also, Holtzman probably has the greatest bio write-up that ever existed on a baseball card. One sentence. Pure awesomeness.

Other blog stuff: On this date in 1975, the movie "Tommy" was released. Does anyone play pinball anymore?
Posted by night owl at 2:19 AM

First and foremost, that color combo with the A's uniform is awesome! That shows the potential greatness of the entire set...and it's already great. Steinbrenner is an idiot. There, I said it.

You're not the only one to do that to frogs. One time I caught two frogs clasped together. My mom had to keep from laughing as I made futile efforts to separate them.

I think in the case of Holtzman, it wasn’t Steinbrenner who hated Holtzman, it was Billy Martin. I don’t know what the origin of their beef was. Martin also had some kind of grudge against Larry Gura and got rid of him too.