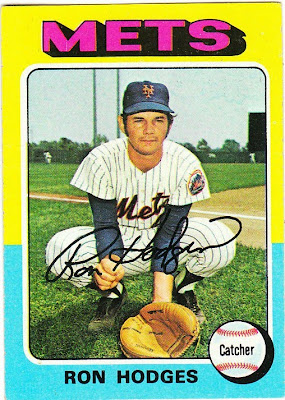 Card fact: It's been exactly 50 cards since we last saw a yellow-light blue combo card. But that's not the record for the biggest gap between color combos. Several color combos have endured a longer drought already.

What I thought about this card then: I vaguely recall one of my friends having it, as they were both Mets fans. But I don't recall any specific thoughts.

What I think about this card now: Since I've never been a catcher, I've always wondered why catchers do that thing where they put their glove out in front of them and flat on the ground like Hodges is doing. Is that to encourage the pitcher to keep the ball low? You don't want them to throw it that low do you?

Other stuff: Ron Hodges and Fran Healy of the Yankees were my first acquaintance with the concept of the back-up catcher, since I watched mostly Mets and Yankees games as a kid. The back-up catcher fascinated me, probably because the catcher is such a focal point of a game, especially when you watch it on TV. Unlike other positions when another player would fill in for the starter, it was very apparent when another catcher was there besides John Stearns or Thurman Munson. I would really focus on the differences between how the back-up catcher operated as compared with the starting catcher.

Hodges played his entire 12-year career with the Mets. He reached 300 at-bats only once and many seasons didn't even come close to that total. A true back-up. 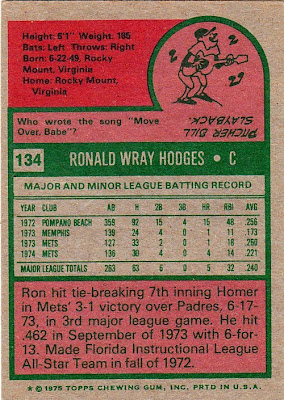 Back facts: Some context for the cartoon:

Bill Slayback was a pitcher for the Tigers in the early 1970s. His career didn't last that long. But he is also a singer and musician, who recorded a record called "Move Over Babe (Here Come's Henry)." The song was written by longtime Tigers broadcaster Ernie Harwell and received airplay back in 1974 when Hank Aaron surpassed Babe Ruth's home run mark.

If you weren't around in 1974, or were just a kid like I was, you probably had no clue what that cartoon meant.

Ron Hodges is the perfect candidate for my Backup Catcher Hall of Fame idea. I've posted about it several times. Hodges didn't make the first class induction, but he is a leading candidate for the class of 2011.

If the Mets would have won a few more pennants Hodges could have been another Charlie Silvera.

I'll have to add that one to my wantlist of vintage catchers in "the pose". I don't know why all catchers do that, but I did it to give my wrist a break. Plus it was a way to taunt the pitcher into throwing a little harder...I used to tell them I didn't really need a glove to catch their "stuff".

The flat, open glove is a target for a curve ball. At least that's how we were taught as pitchers in little league. An ideal curve is supposed to break downward across the plate just below the knees and land more or less where Hodges has his glove. The glove placement may seem exaggerated, but it's more or less coaxing the pitcher to not hang the pitch in the strike zone.