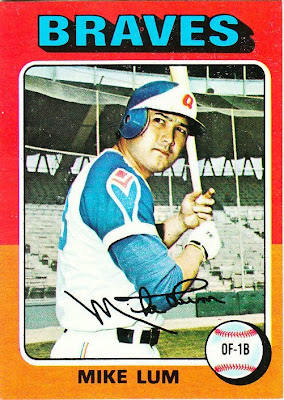 Card fact: This is the third player in the set so far who was born in Hawaii. The first two were Milt Wilcox and Charlie Hough.

What I thought about this card then: I had the mini card. I thought that Mike Lum had something to do with Lum's restaurant. If you are old enough, you remember that Lum's was a family restaurant chain during the 1960s and 1970s. When I was a kid, there really weren't a lot of chain restaurants around. There was McDonald's. There was A&W. There was Howard Johnson's. And there was Lum's. I think there is only one Lum's restaurant remaining, but I still remember the plastic baskets the hot dogs and french fries came in.

Anyway, I thought Mike Lum had something to do with those restaurants. But he didn't.

What I think about this card now: It looks like Lum is posed in front of a fairgrounds grandstand.

Other stuff: Lum was one of the first players of Asian descent to play in the major leagues. He was a regular for the Braves during the early 1970s. After he was traded to the Reds prior to the 1976 season, he became more of a role player and pinch-hitter. But his career lasted until 1981. He was one of only six players to pinch-hit for Hank Aaron. 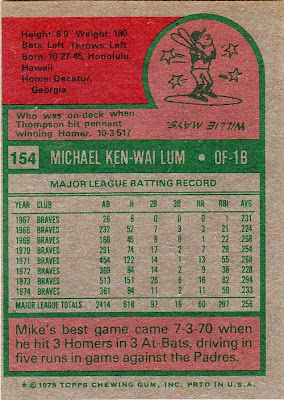 Back facts: If you hit three home runs in a game against the Padres, does it really count?

Other blog stuff: Interesting that I mentioned restaurants with a card that features a color combo that I call the "Burger King" design. I actually remember when the first Burger King came to our city. It was the beginning of the end for Lum's.
Posted by night owl at 2:12 AM

Also, Lum is the all-time HR leader born in Hawaii with 90. Victorino is 2nd with 44.

I'll bet that story about pinch hitting for Hank Aaron is a favorite of his. Three homers in a game is impressive. Oh, it was the Padres. Never mind.