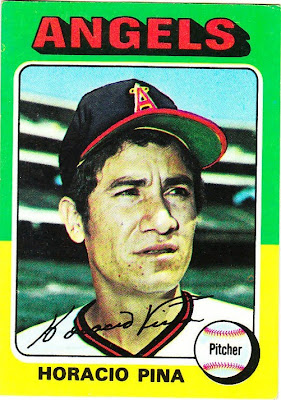 What I thought about this card then: Not only did I never see this card when I was a kid, but I had absolutely no knowledge of Horacio Pina until I started trying to complete the set five or six years ago.

What I think about this card now: He is definitely airbrushed into his Angels cap and uniform.

Other stuff: Pina was a relief pitcher for the Indians, Senators, Rangers, Athletics, Cubs, Angels and Phillies. He apparently was a useful member of the staff during the A's run to the World Series title in 1973.

Also, he was traded from the Cubs to the Angels in July 1974 for somebody's favorite pitcher, Rick Stelmaszek.

After four years out of the majors, he came back to pitch in two games for the Phillies in 1978. 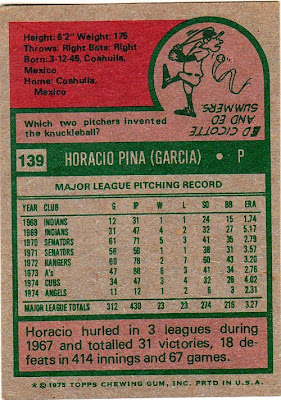 Back facts: Ed Cicotte and Ed Summers were minor league teammates in the early 1900s. The pitch Summers threw was called the "finger-nail ball," which is more accurate than "knuckleball."

Other blog stuff: Another green-yellow card. "Lemon-lime" it is!
Posted by night owl at 2:34 AM

He looks pained to be in his newly airbrushed uniform.

Pina looked so old to me on that card.
Also, his airbrushing is balanced by Rick Stelmaszek's airbushing into a Cubs uni, as they were traded for each other.

Nice to see Pina's card posted on his birthday.

Damn, I never noticed that. I've been trying to look at the birth date of each card to see if I post any on their birthday and I MISSED one.