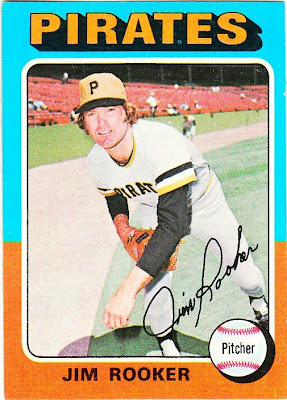 Card fact: In contrast to the green-light green color combo, the blue-orange combo has been one of the least-used combos so far. I believe only the tan-light blue combination has appeared fewer times.

What I thought about this card then: Nothing.

What I think about this card now: There are a few photos in this set that are taken in this location. I am puzzled as to where they are in the ballpark. Is that strip of green the back fence? Is that strip of brown the warning track? Is that Candlestick Park? I suppose if everything wasn't tilted I wouldn't be so disoriented.

Other stuff: Jim Rooker was a steady contributor to the starting staff for the Pirates teams of the 1970s. His best season might have been his 1974 season, finishing with career highs in ERA, strikeouts and wins. Rooker also started Game 5 of the 1979 World Series, even though he was a limited contributor for the team that year. The Pirates were down 3 games to 1 to the Orioles at that point, but they went on to win that game and the next two to claim the Series.

Rooker is probably best known to recent fans as the broadcaster who, after watching the Pirates put up a 10-spot in the first inning against the Phillies in Philadelphia, said on the air that if the Pirates didn't win the game, he would walk home. Well, the Pirates blew the game. After the season, Rooker walked for charity, from Philadelphia to Pittsburgh.

Rooker also writes children's books, had a political career and cares for dogs. I'm exhausted just listing all the stuff he does. 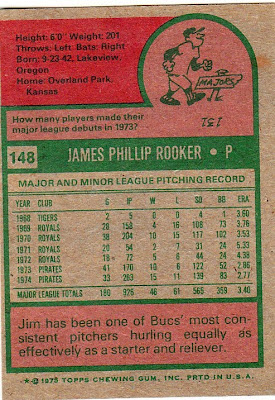 Back facts: I wonder how 131 players compares to how many players make their major league debuts per year these days. I'm sure it's more. A lot more.

Other blog stuff: Happy birthday to former Dodger pitcher Ramon Martinez (Pedro's big brother). He's 42 years old today. But the only birthday I'll be celebrating today will be my daughter's.
Posted by night owl at 1:50 AM

Happy Birthday to your daughter. I did a quick search for how many players made their MLB Debut last year. I couldn't find any stats for any years...I'll bet Jim Rooker could find out. He can do lots of things.

Oh, I think that catches me up on all the posts since I went on vacation.

Too many fans in the stands to be Candlestick during that era. ;)

It is a fence and warning track as you thought. I think the stadium is Veteran's in Philly. Looks like artificial turf and the seats are red.