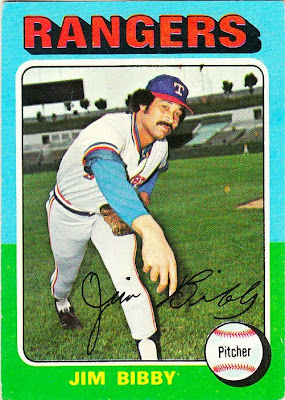 Card fact: It has been a whopping 74 cards since the last "light blue-green" color combo card was featured. By the way, I've got to start referring to these color combinations by their given names. I will refer to this as the "day baseball" combination from this point forward.

What I thought about this card then: Jim Bibby was a Ranger, and we held the Rangers in high regard in my house for inexplicable reasons. I believe Bibby was one of the first Rangers cards that we ever saw. He had the mustache and the hair going, so he was definitely a cool cat.

What I think about this card now: Still a classic card. One of the better ones in the set in my opinion.

Other stuff: Bibby just died last month so his career has been mentioned quite a bit lately. Bibby was a hard-throwing right-hander, who was signed out of college by the Mets, but known mostly for his time with the Pirates. He was a starter for the 1979 World Series champions and the starting pitcher for the National League in the 1980 All-Star Game. He went 19-6 for the Pirates that year.

Bibby also threw a no-hitter against the A's when he pitched for the Rangers. In the early stages of his career, he spent two years of active duty in the Army and was a truck driver in Vietnam.

Bibby is one of six members of the 1979 Pirates who have died. The others are Willie Stargell, John Milner, Bill Robinson, Dave Roberts and Dock Ellis. 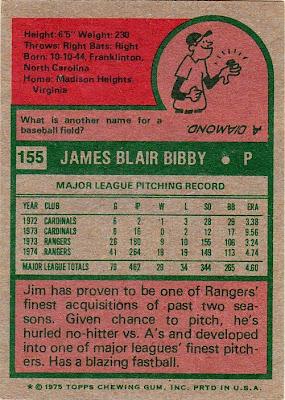 Back facts: I wasn't aware that Bibby came up with the Cardinals until reading the back of this card. I just looked up his rookie card from 1972. It's one that he shares with two other players. It's rather comical. It's obvious he's wearing a pinstriped Mets jersey, but his cap is airbrushed bright red.

Other blog stuff: Former Brewers closer Danny Kolb was born on this date in 1975. He had a great season in 2004, then imploded when acquired by the Braves in 2005. Never the same after that.
Posted by night owl at 12:37 AM

Great card. I traded for it on the Topps Giveaway site. No one goes 19-19 anymore.