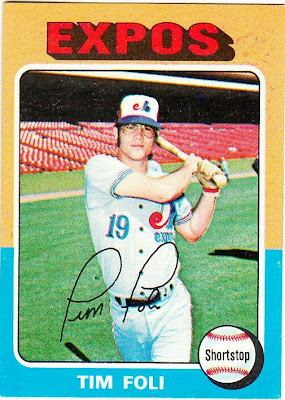 Card fact: This is another one of the cards that I pulled from the first packs of cards that I ever purchased.

What I thought about this card then: I thought it was a cool shot of Foli, looking very suave -- despite the glasses -- after a casual swing of the bat.

What I think about this card now: I believe this photo features the very same ballpark as the photo in the Jim Rooker card in the previous post. But the fence and the warning track are much farther behind Foli than Rooker.

Other stuff: Foli was a solid fielding, rather poor hitting shortstop who enjoyed a long career with the Mets, Expos, Pirates and Angels, mostly. His average and on-base percentage were lousy most years, but he kind of put it all together for the 1979 Pirates and was one of the key members of the We Are Family World Series champions.

Foli was known for his explosive temper, and he was involved in several confrontations and fights both as a player and a coach. I was raised to believe that guys wearing glasses were the timid types. But perhaps that's what got Mr. Foli so upset. Damn stereotypes! 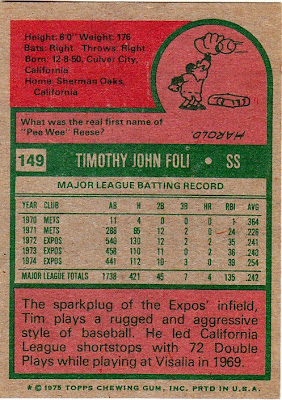 Back facts: I don't know how long it took me to make the connection that the "Pee Wee" mentioned in the cartoon was THE Pee Wee Reese. But it was a lot of years. 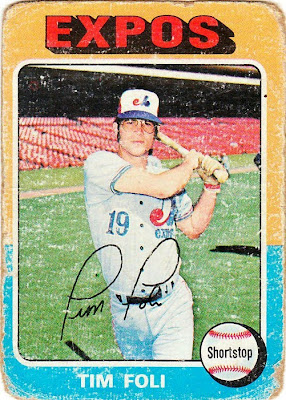 Oldie but goodie: Here is one of the cards that I have owned longer than almost any one in my collection. Thirty-five years. And it's got the rounded corners to prove it.

Other blog stuff: In a bit of a take-off on White Sox Cards' suggestion, I'm calling this color combo the "seaside combo." You've got tan (the beach) and light blue (the water). It works for me.
Posted by night owl at 1:59 AM

It looks like your original got into a few confrontations in the ol' shoebox. I never knew he was such a hard nosed player.

I like how the sig says "Pim Poli," or at least strongly appears to.