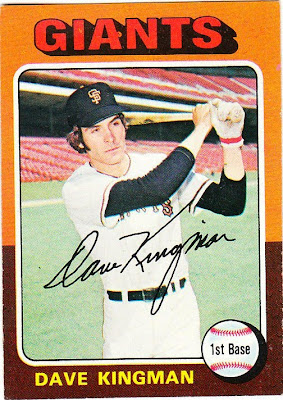 Card fact: The "orange-brown" color combo -- the candy corn combo -- takes the lead with its 17th card in this set.

What I thought about this card then: I don't think I saw this card in 1975, but I did see it a couple of years later. I remember being surprised to see Dave Kingman as a Giant. I watched a lot of Mets games in the late 1970s and always knew Kingman as a Met.

What I think about this card now: The color combination goes well with the Giants, which is plain disgusting if you ask me.

Other stuff: Kingman was a 6-foot-6, free-swinging slugger who could whiff four times in a game or hit a couple of titan blasts. It really was all or nothing with him. I think people like to embellish his career a little bit, because he had such an ability to hit monster home runs. And it didn't hurt that he played in two major markets -- New York and Chicago.

However, even though some folks will say Kingman was one of the most "feared" hitters of the 1970s, I did not fear him at all when he came up to the plate against my team when he played for the Mets. That's because Kingman struck out at a crazy pace. He was almost an easy out in this area. "Phew, Kingman's up. Here's out number two." His ability to get on base was not good.

He did have a couple of excellent seasons for the Cubs, when he somehow figured out how not to hit .221 for an entire season. But that was pretty much it. And that's how a guy with more than 400 career home runs cannot get into the Hall of Fame. Seriously, we laughed when this guy came to the plate. He was awkward in the field, too.

Also, he didn't get along with reporters very well.

Today, Kingman is known for his home runs, the Tommy Lasorda tirade he fueled after hitting three homers against the Dodgers, and playing for a team in each of baseball's then four divisions (Mets, Padres, Angels, Yankees) in the same season -- the only player to do that. 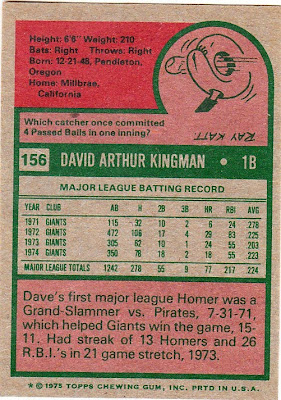 Back facts: This is the second cartoon that shows a ball going completely through a catcher's mitt. That's got to hurt.

That "other blog" line was downright disturbing. I had no idea his career batting average was .236 until this card made me go look it up. Almost of third of his at-bats ended in a whiff. All I remembered was the homeruns.

He does hold the record for most HR's in the last season of a career.

Collusion and Canseco (and the strikeouts) kept him from being employed further.

I only really recall his 1979 year when he put it all together. Every other season was feast or famine.

He was fun to watch. His swings for misses were almost as awesome as when he connected. And if you've never seen a giraffe trying to catch a fly ball in left field you haven't seen Dave.