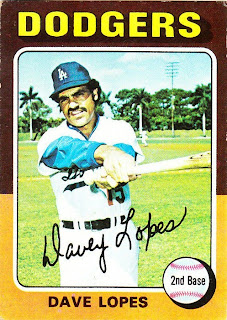 Card fact: This is the first card to feature Lopes' trademark mustache. In his '74 card, Lopes has this scruffy thing going. But from the 1975 card until his final card in 1988, that 'stache is there every step of the way.

What I thought about this card then: I didn't see it. But when I was a teenager and had some money to blow on cards, I tracked down some of the '75 Topps Dodgers, including this card.

What I think about this card now: I love the photo background. The palm trees are awesome. I don't care where the Dodgers hold spring training now. Long live Vero Beach.

Other stuff: I took a lot of pride in Lopes' stolen base prowess when I was growing up. The Dodgers were a good offensive team in the 1970s, but they were rarely at the peak of the statistical categories. Lopes was the only guy who could get to the top on a consistent basis, winning the stolen base title in back-to-back seasons.

I was especially proud of Lopes' major league record of 38 straight stolen bases without getting caught. And I was not happy when Vince Coleman broke the mark in 1989. 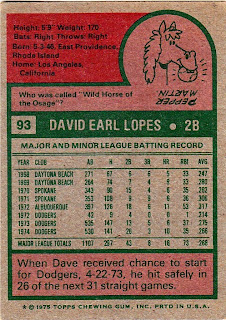 Back facts: Not much to say -- probably because Topps didn't feature a stolen base column on its card backs in the '75 set.

Other blog stuff: Brown and tan is found a lot in fashion, and is also a common color combination for dogs. But for some reason, I think of food when I see this color combo. I don't know why. Everything reminds me of food, I guess. I haven't come up with a name combination yet. But I'll figure it out. (Edit: The Lopes card does not have brown & tan borders but brown & orange borders. The borders on this particular card are faded).
Posted by night owl at 1:13 AM

I'd like to suggest Hardwood Floors for the Brown and Tan combination.

I'll go with the chili-dog.

I'm stickin' with the theme, but I thought enchilada sauce when I saw the combo. That is NOT because it is Mr. Lopes on the card either. I mean it. But, now I'm hungry again.