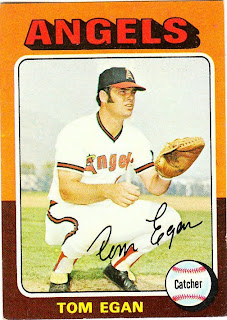 Card fact: This is the final card of Tom Egan issued during his career.

What I thought about this card then: This was one of the cards my friend Jennifer had. My lingering memory of the card was how atrocious his batting statistics were.

What I think about this card now: I miss the posed catcher's crouch on card photos. I suppose it's still around, but not nearly as much as it once was.

Other stuff: Egan's claim to fame is that he caught Nolan Ryan's third no-hitter. It was in the final week of the 1974 season. Ryan struck out 15 Twins to win his 22nd game, which was nearly one-third of the wins the Angels had in 1974. 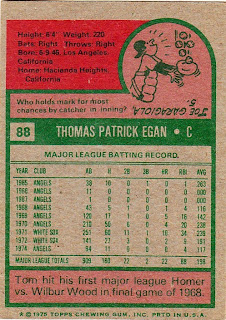 Back facts: Look at those batting averages! Yikes. Do you think Topps put a cartoon about Joe Garagiola -- a famous poor-hitting catcher -- on the back of Egan's card on purpose?

Also, five chances in one inning doesn't speak well of Garagiola does it? I would assume he had an error or two in that inning.

If he had more career at bats, we might be talking about the Egan Line instead of the Mendoza Line.

Another chance for me to bring up Rick Stelmaszek. I have kidded him that Ryan tossed 4 no-hitters while with th Angels and all were caught by different catchers and Stelmaszek couldn't have managed to get in that group! It would have sealed his place in immortality.