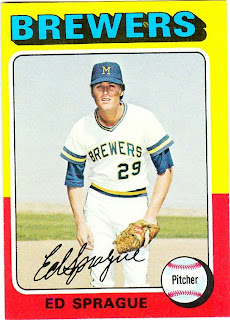 Card fact: Ed Sprague appeared on just three Topps cards, and those cards were spaced three years apart. He was in the 1969 set as an Athletic, the 1972 set as a Red, and the 1975 set as a Brewer. So this is his last card.

What I thought about this card then: Sprague is listed as 6 feet tall, but to me as a kid, he seemed like a hulking individual walking out of a ferocious dust storm. I don't know where I got that from, but that's what I thought.

What I think about this card now: Looking at it now, it appears to be a pretty dull photo. Sprague may or may not be pretending to be looking in for what pitch to throw. Or he could be simply standing. Either way, it's darn tootin' dull.

Other stuff: Sprague is one of several players in this set to have had a son play major league baseball. His son, also named Ed, was a member of the Blue Jays back during their early 1990s heyday. 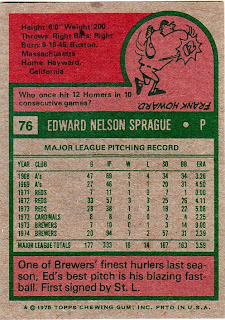 Also, why abbreviate St. Louis when you don't have to?

Other blog stuff: No blog stuff today. The No. 1 song in the country on this date in 1975 was "Lucy in the Sky with Diamonds," the Beatles remake by Elton John. Far out, man.
Posted by night owl at 2:52 AM

That is a pretty barren landscape. Where did they take all these pictures? Was it Spring Training sites?

Many were during spring training. The Brewers' site has been in Arizona for as long as I can remember, so that would explain the barren-ness.

The wording on the back of Billy Williams' 1970 Topps card always confused me. It was worded a lot like this. 'Billy hit 5 HRs in 2 consecutive games.' Something like that. I always thought that meant 10 HRs. 120 homers for Howard would have been insane.
Also ... anybody else think Howard looks like he's wearing his muffin costume? Good gravy he's huge!