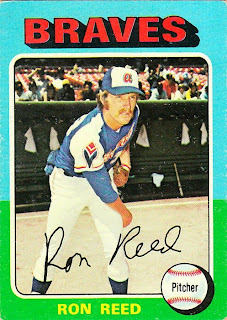 What I thought about this card then: Well, interestingly, because he is showing a mustache, I thought he was cool. It was a prized card that, nonetheless, was traded away for some '75 minis.

What I think about this card now: Reed is 6-foot-6, but he doesn't look that tall to me in this photo. ... Damn, maybe that really ISN'T Ron Reed.

Meanwhile, I'm enjoying the dugout scene in the background with the hanging towels and the random bat resting on the bench.

Other stuff: Reed was kind of the Deion Sanders/Bo Jackson of his time -- a guy who could play professionally in two different sports. I don't believe Reed played in the NBA and in the major leagues in the same calendar year, like Sanders and Jackson did, but it's impressive anyway. Reed, a star for Notre Dame, played in the NBA from 1965-67.

My knowledge of the NBA is nil. Did they make NBA trading cards in the '60s? Can you find a Ron Reed NBA card? I might have to research this myself.

Another thing: I once read an article in a magazine that detailed the signing habits of major leaguers of the day. The article said Reed was rather unpleasant. I don't know if that was a fair representation of him, but that stuck with me all this time. 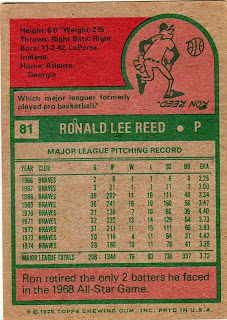 Back facts: Look, Reed is the answer to the trivia question on his own card!

Other blog stuff: I've got nothing, so I'll go with a birthday of an actress I quite like. Amanda Peet is 38 today.
Posted by night owl at 2:32 AM

In fairness to Ron, if that really is Ron Reed, he should have gotten a trivia question on another card, just to give him another card to collect. Also, he must have had a really good first half, and really bad second half, to have made the 1968 All-Star Team. His season numbers aren't that great.

A few years ago, I approached Reed about signing some cards for an education program I ran while at a newspaper in Chicago. Realistically, there was nothing in it for him, but he signed about 25 cards for the program.
I thought that was a nice gesture on his part. And no, although I was tempted, I did not keep any of the cards for my collection.