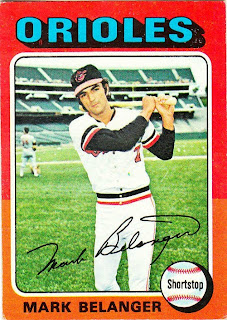 Card fact: One of the best signatures you'll find in the set.

What I thought about this card then: Didn't see it. I've mentioned before that we ragged on my Orioles-loving brother endlessly about Belanger's impotence at the plate. My brother got me back a little bit when the Dodgers acquired Belanger after the 1981 season. But not too much, or he would have had to admit that Belanger's hitting sucked.

What I think of this card now: This photo is proof that they made players skinnier in the 1970s. Also, I wish I could figure out who the person/coach is in the background. I tried, and I failed.

Other stuff: Belanger is one of several players featured in the 1968 and 1969 Topps sets in which the photo was repeated. I always wondered what it would be like to be a collector during that period. I know I'd be disappointed if I saw the exact same pose from a year ago.

Belanger looked unhealthy to me, both on his cards and during games. Perhaps that's because he was a constant smoker. He died at age 54 from lung cancer. 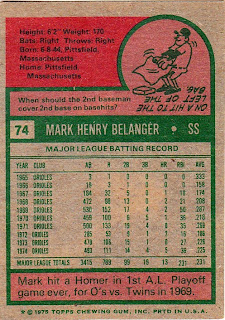 Back facts: I think it's appropriate that on the back of the card of one of the best fielding shortstops of the 1970s there is a trivia question about fielding.

Also, the stats show just how poor a hitter Belanger was, yet he continued to start for the Orioles, even for years after this card came out. These days, no baseball team would put up with a good-field, no-hit shortstop for more than a year or two.

Other blog stuff: I'll go with a birthday today. On this date in 1975, Danica McKeller was born. McKeller played Winnie Cooper on "The Wonder Years." She continues to act and writes books about math (ugh). She's certainly a cutie.
Posted by night owl at 1:35 PM

I like the current trend of "pretty" Danica's out there....

I see there is a precedent for the "I was going to comment on Belanger, but I got distracted when you mentioned Danica" comment. She was and is a cutie.

To me that player in the background appears to be wearing 34. According to Kevin's excellent Orioles NumerOlogy website, that would make it pitcher Bob Reynolds.