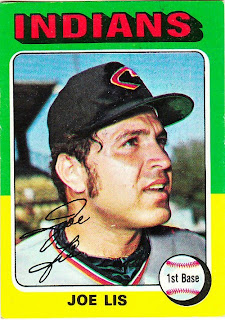 Card fact: We have an airbrushed photograph here. Lis is painted into an Indians cap, but he is actually wearing a Twins cap and uniform. He played for the Twins in 1973 and 1974, until he was purchased by the Indians in June of 1974. That's right, the Indians actually WANTED someone who had never hit above .245 at that point.

What I thought about this card then: We hated this card as youngsters. This was one of the cards that would be snuck into a friend or brother's card stack only to have him discover the card and shriek in horror.

I remember my brother being particularly disturbed by this card. I'm not sure if it was Lis' sweaty hair or his abnormally short name. Who knows what goes through the head of an 8-year-old. But he did not like this card.

What I think about the card now: I'm wondering if Topps having to airbrush this card has anything to do with the team order changing. Perhaps it really wasn't the Bill Bonham card's fault. Perhaps it was Joe Lis all along! See? My brother was onto Lis.

Other stuff: Lis filled in for an injured Harmon Killebrew during the 1973 season. That was basically his big break. But he didn't get to capitalize on it for long. He only lasted until the 1977 season, barely played in the majors and ended with a .233 lifetime average. 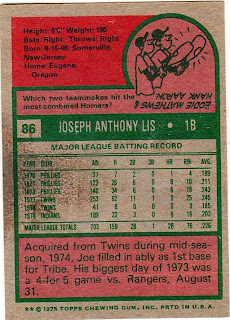 Back facts: The cartoon misspells teammates as "teammakes."

Other blog stuff: I'm surprised I got this post done. The blogger upload feature was acting very strangely tonight. But I persevered. You're welcome.
Posted by night owl at 3:29 AM

He looks confused....like someone just told him .233 doesn't get you into the Hall.

That look on his face seems to say, "Wow. I was a prospect with the Phillies and now I've been pushed aside for Jim Holt and Craig Kusick.....sucks to be me."

I believe Joe Lis was an original Seattle Mariner, which has to be one of the weakest claims to fame on earth.

I'm sorry to hear that. I updated the labels.