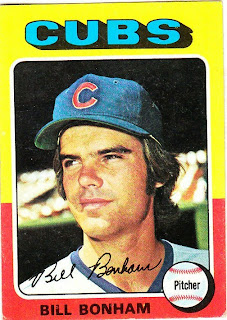 Card fact: This is the card that shakes up the team rotation forever. With the exception of the Barry Bonds card, the team order has been the same, from the Red Sox to the Giants. But it goes haywire with the inclusion of this Bonham card.

According to the team order, this card should have been an Indian. But we won't see the Indians card until tomorrow. I don't know why Topps swapped those two teams.

But even after this card and the next card, the team order doesn't revert to its former pattern. It continues to flop around.

What I think about this card now: Well, isn't it obvious? It's a trouble-maker. It's messing with the harmony of the set.

Other stuff: Bonham's hair gets progressively longer from the 1972 set through the 1978 set. Line them all up and it's like your own little cardboard Chia Pet. 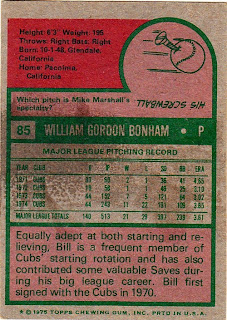 Back facts: That is one hellacious gum stain. Perhaps the best one in the set. ... Bonham led the league in losses with 22 in 1974. His stats for the Cubs were not good. Eventually he got traded to the Reds and things improved for a few years.

Other blog stuff: I think I'm going to call this color combo the "primary colors" combination. Red, yellow and blue is just too obvious a combination not to use that name.
Posted by night owl at 2:31 AM

Just look at that smirk on his face...he KNOWS he screwed things up. And he's happy about it. I think the answer to the trivia question is appropriate for him...Screwball.

I always feel obligated to point out a little Bonham trivia. He co-holds the record for most strikeouts in an inning with 4. My man Rick Stelmaszek had a passed ball, thus allowing Bonham (or forcing him to) strike out the 4th guy.