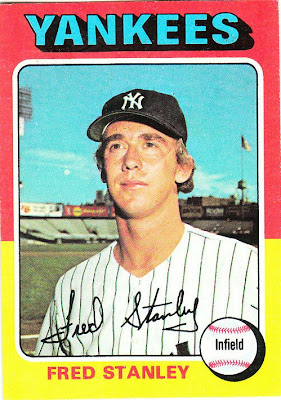 Card fact: I'll be darned if I go through all of the cards in the set right now, but I'm about 70 percent sure that this is the only card in which the player's position is defined solely as "infield." If you want to prove me wrong, you know what to do.

What I think about this card now: My knowledge of Yankee Stadium comes post-renovation, 1976 onward. This photo doesn't remind me much of Yankee Stadium. If the Anacin ad wasn't there (and Stanley wasn't in his home pinstripes), I'd think it was a different park.

Other stuff: Fred "Chicken" Stanley was my hero back in the late '70s when it seemed like every player on the Yankees could hit. Stanley was used as a defensive replacement for New York between 1973-80, mostly at shortstop. He had a very weak bat, hitting .216 for his career. It was a delight to see him in the Yankees' lineup.

Yankees announcer Phil Rizzuto loved Stanley because he knew how to play shortstop well. If I remember correctly, Stanley could bunt, too, which also won Rizzuto's blessing.

Stanley also played for the Seattle Pilots (he was the last Pilot active in the majors), Brewers, Indians and Padres before playing for New York. He finished up with Oakland in 1981 and '82. After his playing career, he worked for years as a coach and manager in the minors. He was also the Brewers' assistant general manager. He has been the Giants' director of player development for the last four years. 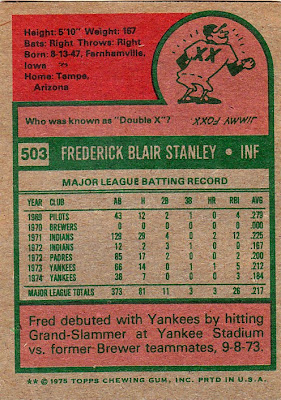 Back facts: I doubt Stanley received any kind of sense of vengeance from hitting his grand slam against the Brewers. He played for them three years before the grand slam, and as you can see by the stats, didn't get a single at-bat (yes, I do know the Brewers were the former Pilots).

Other blog stuff: Actor James Garner was born on this date in 1928. He's acted on many shows and in many movies, but I remember him from "The Rockford Files" because it was one of my dad's favorite shows.
Posted by night owl at 1:33 AM

There is at least one other player in the '75 set who has his position listed as "Infield" -- Larvell Blanks (#394). Definitely not a common practice by '75, though -- I associate it more with Topps sets from the '60s -- and I think '75 may have been the last year they did it at all.

Weren't they playing in Shea that year?

He was almost born on my birthday. I don't have much to say about the Yanks.

I would love to hear Rizzuto's call of Fred Stanley's Grand Slam!