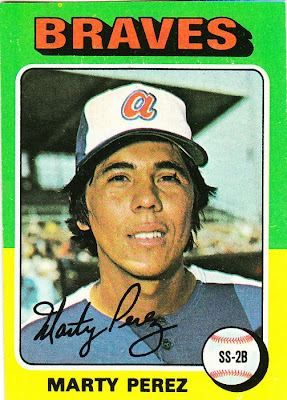 Card fact: This is the first green-yellow bordered card to feature a player who isn't airbrushed into his uniform since the Bruce Bochte card at #392. Since then we've had Mike Wallace, Gene Garber and Ross Grimsley, all wearing airbrushed caps.

What I thought about this card then: I didn't see it. My first knowledge of Marty Perez was when I pulled his 1977 Topps card when he was with the Giants.

What I think about this card now: Not a lot to say. I do know those Braves uniforms from the '70s get stranger and stranger the farther we get away from that decade.

Other stuff: Marty Perez was one of those players that seemed to play for only bad teams. He spent most of his time with the Braves, which slowly sank to the bottom of the N.L. West each year he was with the team. Later he played for bad Giants and A's teams. He did have a one-game stint with the 1977 World Series champion Yankees. But he was traded to Oakland in April of that year in the Mike Torrez deal.

Perez started for Atlanta for five-plus seasons, which sums up the '70s for you. Perez was a shortstop with no power, little ability to get on base and average fielding skills. Yet he had more than 400 at-bats from 1971-77.

Perez ended his career with the Mets in 1978, although he didn't play for them. 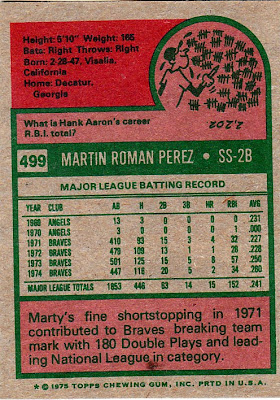 Other blog stuff: Tony Orlando was born on this date in 1944. He's 67. It's a toss-up between which song I heard more as a kid, "Rhinestone Cowboy" or "Tie a Yellow Ribbon Round the Old Oak Tree." But I'd say Orlando's tune wins out. It was everywhere.
Posted by night owl at 2:49 AM

His defensive WAR was -1.4 for that season.

The fact is that Atlanta allowed more hits than anyone else in the league. The Braves were pretty lousy on defense, with neophytes in center (Sonny Jackson), third (Earl Williams and Darrell Evans), catcher (Williams again), and old players who could barely get out of the way of any ball (Hank Aaron, Orlando Cepeda, Zolio Versailles).

You allow more people on base, you're going to turn more double plays.

I got in a wreck once when lady "shortstopped" in front of me. I'm glad they don't keep stats with tally marks, but I do like the cartoon.