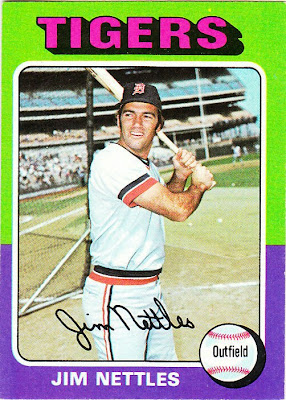 Card fact: This is the final Topps card issued of Jim Nettles during his career.

What I think about this card now: A batting cage has appeared on back-to-back cards! I'm going to say that's a record without even checking any of the previous cards. Because that's how I roll.

Other stuff: Nettles is the younger brother of former Yankee (among other teams) Graig Nettles. I didn't know that Nettles had a brother who played major league baseball for a long time. That's because Jim Nettles' career was all but over by the time I started watching baseball.

Nettles started out with the Twins after four years in the minors. From there, he played for a variety teams. He was traded to the Tigers and played for both Detroit and its minor league teams. After 43 games with the Tigers in 1974, he moved on to play baseball in Japan and Mexico. He returned to major league baseball in the late '70s, playing in the minors for the Indians, Pirates and Royals.

In 1979, he played in 11 games for Kansas City. His last year in the majors was in 1981 when he had one at-bat for Oakland. After that, he managed for a number of minor league teams from the mid-1980s through the mid-90s. He was a minor league coach five years ago. His daughter is married to longtime Kansas City Royal Mike Sweeney. 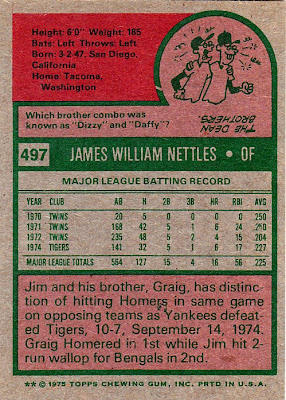 Other blog stuff: Three players in this set celebrate birthdays on April Fool's Day. Willie Montanez is 63, Rusty Staub is 67 and Phil Niekro is 72.
Posted by night owl at 12:49 AM

For a guy with so few homers, it's a little surprising he and Graig had homers in the same game.