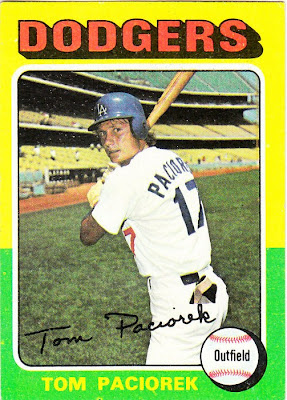 Card fact: One of the first Dodgers that I obtained in 1975. Steve Yeager and Geoff Zahn were the first, and then it gets hazy after that. But I know Paciorek was in the next group.

What I thought about this card then: I remember noticing the sweat under Paciorek's helmet and that he seemed like he needed to clean himself up.

What I think about this card now: A nice view of Dodger Stadium in the background.

Other stuff: Paciorek was a top prospect when he was drafted by the Dodgers. He was a touted defensive back for the University of Houston and eventually had his number retired by the team. But with L.A., he had trouble breaking through in the outfield and ended up being a platoon-type player.

The Dodgers traded him to the Braves in the Dusty Baker deal. Paciorek received a few more at-bats with Atlanta and hit well his first season with them, but struggled after that and was released twice by the Braves. The Mariners picked him up and that is where he found his niche. In 1981, he hit .326 as a starter during the strike-shortened season and finished in the top 10 in MVP voting.

Paciorek continued as a semi-regular with the White Sox for three years before finishing up with the Mets and Rangers. He played for 18 seasons even though many of those were in a platoon role.

After his playing career, he became a broadcaster, most notably with the White Sox and the Braves. Chicago's Ken "He Gone" Harrelson reportedly hung the nickname "Wimpy" on Paciorek, who was broadcaster through 2007. 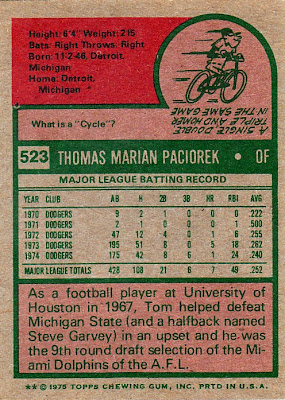 Back facts: I'm pretty certain that in 1975 I didn't know what a halfback was or why Steve Garvey was being mentioned on the back of Paciorek's card.

Ok, he's wearing his batting gloves (they look like work gloves) so what's that in his back pocket? Is it one of those shin/ankly guards?