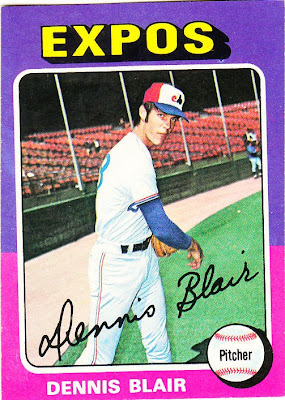 What I thought about this card then: I didn't see it. The first card of Blair's I had was his 1976 Topps card. It also was one of the first doubles I ever had. Just him and Cliff Johnson in my tiny dupes box.

What I think about this card now: My, what a tall, thin person Blair was back then! For some reason, that didn't strike me on his 1976 card. But it's very obvious here.

He was traded to the Orioles in 1977 and is airbrushed into an Orioles cap on his 1978 card, but he never played in the major leagues for Baltimore. He emerged back in the majors briefly with San Diego in 1980, but that was the end of his playing career. 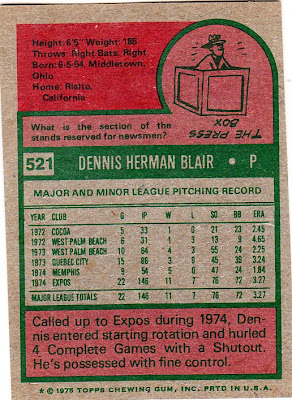 Back facts: Hey! A sportswriter cartoon reference! I like that!

The write-up about Blair being "possessed with fine control" is very odd. I suppose it's better than being "possessed" with something else, but I think Topps could have worded it differently.

Other blog stuff: My natural reaction when seeing this card was to equate Blair's appearance in the photo with Herman Munster. But then I read Josh Wilker's post about this very same card. And I read the reaction of one particular commenter. I think I'll just let that thought go ... sheesh.
Posted by night owl at 2:23 AM

From this point forward, I will imagine you at work in a little box with your hat on. You will be possessed with fine writing skills.