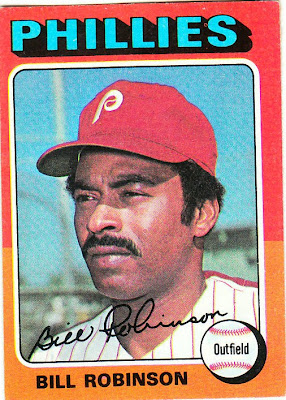 Card fact: One of four players with the last name "Robinson" in this set.

What I thought about this card then: This was pulled out of one of those summertime packs in 1975. I always valued the Phillies cards and this was a good one, even though I had no idea who Bill Robinson was.

What I think about this card now: Robinson seems to be transfixed by something.

Other stuff: Robinson was mostly a part-time player for the Braves, Yankees and Phillies. But then he was traded to the Pirates for pitcher Wayne Simpson in 1975. Pittsburgh installed him as a starting outfielder and Robinson became a powerful contributor to those late 1970s Pirates teams.

Robinson returned to the Phillies late in his career and retired after the 1983 season. He later worked as coach, most famously for the 1986 World Series champion Mets. He was also a coach when the Marlins won the World Series in 2003.

Robinson died at age 64 while working as the minor league hitting instructor for the Dodgers in 2007. He was on the road and died in his hotel room. 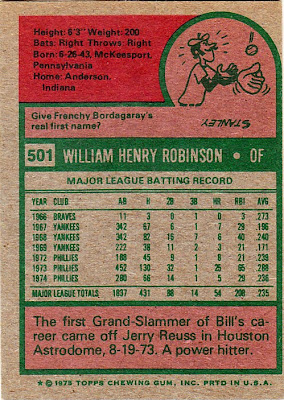 Back facts: Is the cartoon question a question or an order? 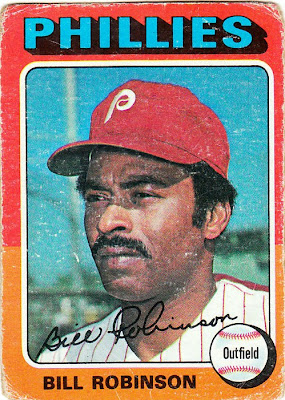 When Robinson first broke in as a regular, with the Yankees, he was apparently considered to a phenom who would be the Yankees' next great outfielder. He didn't live up to this promise right away, but after bouncing around from team to team for a while, he eventually hit his stride in Pittsburgh.

Too bad about the way he died and not a good way to start the next 100.