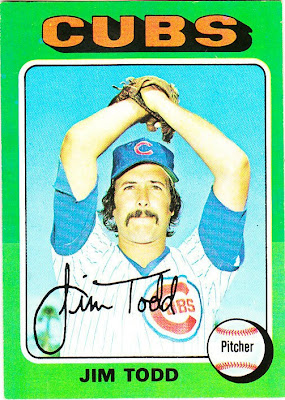 What I thought about this card then: My brother had this card. He would joke that you could look up Todd's nostrils.

What I think about this card now: Let's play a game of "does he really have a ball in his glove?" I think he does.

Todd never enjoyed another season that strong and was shipped back to the Cubs for the 1977 season. He later pitched for the Mariners and then ended his career back with the A's. He pitched in the minors for the Giants in 1980 before retiring. 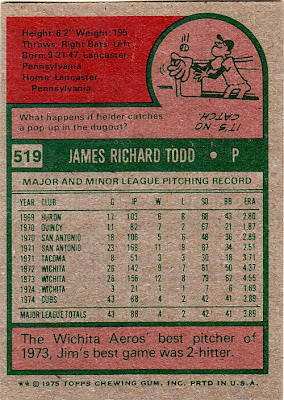 Back facts: For a long time, I wondered whether a player would be out if a fielder caught his foul pop in the dugout. I would have saved myself a lot of wondering if I had only looked at the back of this card in 1975.

Other blog stuff: It's a holiday, so I'll take a break from research. Happy Easter.
Posted by night owl at 1:56 AM

That '75 season was really nice.

I hope you had a Happy Easter.